On Thursday, we started the four hour journey from Jos to Abuja at 7 am.  The goal was for our colleague to be able to make the trip back in time for an important church meeting that evening.  This particular road has been known for armed robbers, so there are many police and para-military check points along the way. 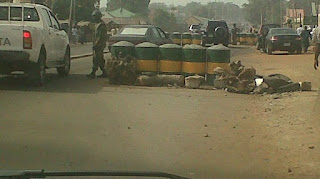 Some of the police and soldiers are very courteous and friendly, wishing us safe travels.

Two boldly demanded that we give them money.  We offered a blessing instead.  One accepted the blessing...the other one kept demanding money.  We didn't give any and eventually we were released.

At one stop, however, we were waved over by the police to park.  I've learned that there are strict rules about how to behave when this happens, or the consequences can be severe.  Our colleague was asked to provide his license and papers which were thoroughly examined.  Then the car was examined.  We began to hear arguing and we knew this wasn't good.  The violation?  A brake light was out and the spare tire needed more air (according to the police officer).

Both of these are relatively easy fixes and minor violations.  A brake light can burn out at any time without the car giving any sort of warning or notice.

It was the consequence that caught us off guard.  A 5000 Naira fine (about $15 - not too bad), license seized (that can get tricky to get back and is only supposed to be seized if there is a traffic accident), and three weeks of driving school for our colleague.  That's right.  You read it right.  Three weeks of daily driving school...for a brake light out and lower tire pressure on a spare tire.

[Nigeria must have the best educated drivers and safest cars in the world with this level of commitment to safety and repeat education!] 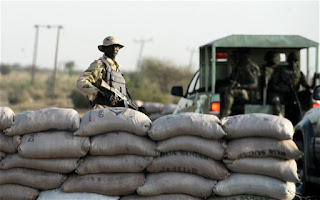 As we knew time was of the essence for our colleague, we wanted him to take care of it in the most efficient way possible, as we continued the journey.  As police don't take cash (which is a good thing!), the first step was to find an internet café which actually knows how to deal with these violations and can print the paper needed to take to the bank.  After three internet cafes that didn't know how or didn't have the capacity, we finally got the paper we needed at the fourth internet café.  Now to the bank to make the payment.  After waiting, and waiting, and waiting, we learned the computer was down.  Power is on and off so much in Abuja.  Finally, that payment was made.

Then we were on our way.

It was up to our colleague to find his way back to that check stop and the police station associated with it to get his license back.  And he would also need to plead with the people there not to require the three weeks of driving school.

I get to say, "This is what happens in Nigeria."  I get to leave.  My colleague has to struggle with the fact that this is his country.  These are his people.  It's embarrassing for him.  It's beyond annoying.  It's a waste of time.  It's over the top.  The drain is emotional, financial, and time-consuming.

The good news is that he was able to get his license back and they waived the education requirement.  He missed his meeting at the church but was thankful to have the whole thing behind him.

This time.  What of next time?  What is a citizen to do when faced with this again and again?

One thing that I learned on this trip is the "gentleman's agreement" that the country of Nigeria has between the north and the south.  The agreement is that every eight years, there is to be a trade-off on whether the president comes the north or south.  The north tends to be more Muslim; the south tends to be more Christian.  The current president is from the north.  What I learned is that when the president from the North comes in, his people are all put into all ministerial and cabinet positions.  All the favor swings toward the North and the Muslims.  When the president from the South comes in, similar things happen, although Christians argue that their people work to be more egalitarian for all people.

Whatever was done by the previous president is usually undone and everyone who is from the other camp simply holds their breath until the eight years have passed.  This can't be good for the country overall.

In the US, we can say the same thing happens, as it relates to one president undoing what another has done.  But there is freedom of choice at each election.  The other issue is that things go much further here, with lives lost, police looking the other way, etc, based on where you are from.

Lots of thinking and processing to do on my part as I watch, observe, and try to identify with my Nigerian brother and sister.

I have now left Nigeria and am in Tamale, Ghana.  Today I start teaching at the Assemblies of God Bible College, where I'm told I will have 90 pastors as students of Church-based business as mission.  I was supposed to teach one class but they decided to open it up for all the students at the college for this section!