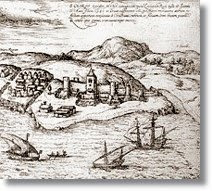 
Continuing our story: the land that we now call Ghana was dominated by several African groups prior to the European era of exploration. But in 1471, The Portuguese arrived in the region, and in 1482 they build the first of several fortresses-- the one pictured above called Elimina-- on the coast.
The Ga people were living in their capital of "Great Accra" about 15 km inland, but soon built "Small Accra" directly on the coast as a base for trade with the Portuguese. In time, the British, Dutch, French and others arrived. They were all attracted by gold, ivory and timber. By 1650, the first Danish ship arrives at the coast. The Danes were the last of the Europeans to arrive, who competed and sometimes fought each other, for trade rights with the Africans. In 1661, the Danes built the fort they named "Christiansborg" (sometimes known as Osu Castle) in Osu (modern-day Accra). It became the home of the Danish governor and later the center of Danish slave trade. Tody, the fort is the residence and office of Ghana's president.
The Slave Trade 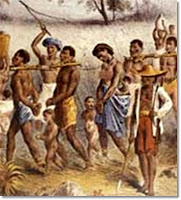 Within a short time the commodity of choice was no longer ivory or timber-- it was human life. Slaves, desired for plantation work in the Americas, became even more valuable than gold. England, the Netherlands, Portugal, Germany, France, Sweden and Denmark all vied for the human trafficking market, which became highly organized and efficient. With its slaves, gold and accessible coastline, "Ghana" became the center of all European activity in West Africa for 350 years.
By the 1700s, several of the southern kingdoms were deeply involved in the slave trade while others had been virtually wiped out-- their people stolen for slavery. The Akwamu, Fante and Asante enjoyed significant benefit from the trade. Through their European connections the Asante received weapons and used them to conquer more land and fight other kingdoms. The Asante capital of Kumasi became highly developed more advanced than many European cities. 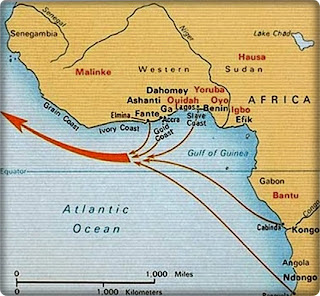 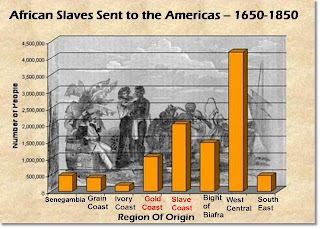 The Europeans traded weapons and manufactured goods for the slaves, which were transported across the Atlantic Ocean to work on plantations in "the new world". The trips took five weeks. More than two thirds of the slaves died during capture attempt, in the dungeons of the forts, or during transport. It is estimated that more than 12 million slaves were transported across the Atlantic. 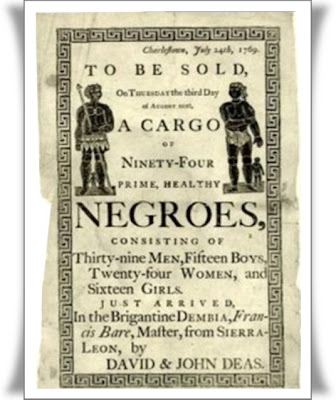 In March, 1792, Denmark decided to stop the so-called "trade with Negroes" to the Caribbean colonies. The King and politicians were under pressure from the growing anti-slave lobby, but the decision was based on economic, not moral, calculations: Denmark simply no longer made enough profit on the trade.
The new law only addressed the import of slaves to the Caribbean islands. It was not a general ban on slavery. Furthermore the law is not to be effective until 1803. Result: In the following ten years the slave traders intensified their efforts to make as much profit as possible on human lives.
Later in 1792, Britain passed a law similar to the Danish - not to take effect until 1807. Both countries laws stopped only the import of slaves to the colonies, not a decision to actually abolish slavery itself. Within the following years all the European countries and America drafted similar laws, but slavery and the trade with people continued to be legal.
Meanwhile, Osei Bonsu ascended the Asante throne. He was king of land reaching beyond the borders of present-day Ghana – and sought to expand the Asante kingdom. In 1806, the Asante kingdom invaded kingdoms to the south and war broke out with the Fante confederation which was supported by Britain. The ever expanding Asante were threatening British commercial interests in the region. 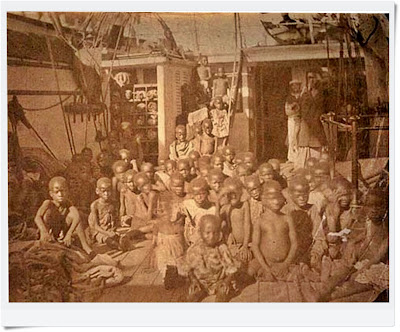 British ban on slave trade from the Gold Coast became effective in 1807. The British dominated the region and decided to change business from slavery into exploiting cocoa, gold, timber and palm oil. 1824, the Ashantene, Osei Bonsu, dies. The British sought a chance to break Asante control of the Gold Coast trade and the first Anglo-Asante war began. By 1826, the Asante were forced to give up their claims to areas on the coast.

Slavery was officially abolished in all British colonies, and all British-owned slaves were freed in 1833. Fourteen years later the Danish crown abolished slavery in Danish colonies. Eventually, Denmark sold all its remaining forts and possessions on the Gold Coast to Great Britain for 10,000 pounds, thus Great Britain dominated the region completely. Only the Asante kingdom resisted British control. The British efforts to control the Gold Coast and especially the gold trade resulted in the another British-Asante war. Asante history recorded a victory, but they only managed to hold back the enemy for a few more years.

In 1874, the Gold Coast was officially proclaimed a British crown colony. Originally the colony was only a 100 km wide strip along the coast, but the British continued to harrass the Asante kingdom and their wealth of gold. The British attacked again and burned down the Capital of Kumasi. (Echoes of the War of 1812) The kings palace was found empty, but the British grabbed all values they could find. (More 1812 echoes)

1884-1885 saw the infamous Berlin Conference, in which King Leopold of Belgium called the the European countries together to draw up and impose new borders on Africa. Thousands of kingdoms throughout Africa were instantly squeezed into approximately 50 European colonies. No consideration was made regarding existing people groups, kingdoms, cultures and languages. Present-day Ghana was placed under British control, with the exception of the eastern region being part of German Togoland. Britain maintained control over the Asante kingdom. As a symbolic act the British sent the young Asante king (Nana Ageyman Prempeh I) into exile.

In 1990, Britain plotted to further humiliate the Asante: The colonial governor Frederick Hodgson demanded that the Asante hand over their Golden Stool, a revered religious and national symbol for the Asante. But the Asante had foreseen this demand and created a fake stool to be given to the British. However the provocation was too much for the Asante: they revolted. An attack on the British fort in Kumasi was led by the legendary Asante woman Yaa Asantewaa. 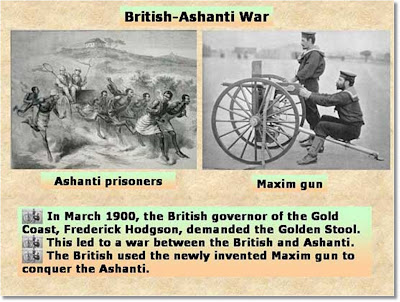 The Asante were crushed in two years; what was left of the Asante kingdom surrendered to the pressure from England. The kingdom was annexed into the British colony and the area north of the kingdom became a British Protectorate. After World War I the German areas in the East went under British control. Nationalist movements began to rise in the region. 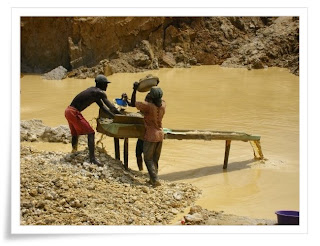 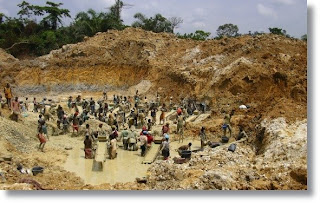 The Road to Independent Ghana

Independence was just a matter of time, and the British leadership probably knew it. The period of Imperial Colonialism was dying throughout the world. In the Gold Coast, legislative elections were held for the first time in 1925. The Asante were allowed to have restricted "autonomy" through the Ashanti Confederacy Council ten years later. After World War II, the USA and USSR lobbied for African Independence. Ghana's Legislative Council held a majority of black Africans, and the British gradually bowed to the pressure for African political representation. 1947, the United Gold Coast Convention (UGCC) was one of many new political parties striving for independence. Kwame Nkrumah, the future first prime minister of Ghana, was party secretary for UGCC.
February 28, 1948: Riots exploded in Accra when police fired at an anti-colonial demonstration. 29 were killed and hundreds wounded. The following year, dissatisfied with the efforts of UGCC, Kwame Nkrumah resigned and founded the Convention People's Party (CPP). CCP quickly became the major player on the nationalist political scene. In 1950, Nkrumah called for a national strike. He was jailed for his demands for independence. The following year, Nkrumah was released from jail after CPP wins the first election for the Legislative Assembly. In 1952, Nkrumah became the first African prime minister and government leader, but still shared the power with the British governor Sir Charles Arden-Clarke. Nkrumah is re-elected in for the post in 1954 and 1956. The movement toward total independence was inexorable. 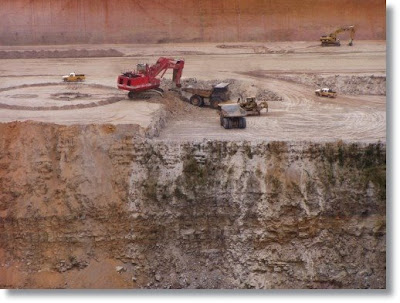 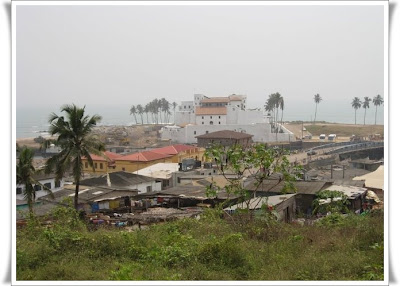