Tzedakah and Mishpat: Righteousness and Justice

Last week I sent in the rough draft of my dissertation for my PhD in Sustainable Development.  It is entitled, "Justice and Righteousness for Creation." 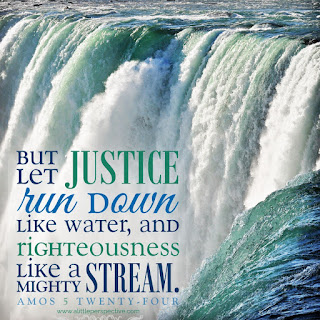 I've been thinking about the words justice and righteousness a lot in the past two years as I worked on this document.  I have to admit that while I've heard those words most of my life, I wasn't really able to define or understand the difference.  Like many things, I had some level of head knowledge but it hadn't settled into my heart.  That changed for me about two years ago, as I began to have a deeper understanding of these important words.
In Hebrew, the words are mishpat and tzedakah (although many say the words cannot be directly translate into English - but for the sake of this blog we will go with mishpat as justice and tzedakah as righteousness).
We see the reference to these two words in a number of Bible passages:
These two words have a depth of meaning that are beautiful to think through.  Rabbi Jonathan Sachs says that both are forms of justice, but are very different in their logic.  Mishpat is retributive justice, referring to the rule of law accepted by society and binding for all members.  He says justice is the most basic institution of a free society. 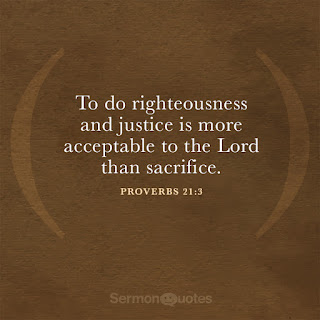 But by itself, mishpat or justice, does not create a society in which all can flourish.  Tzedakah or righteousness is needed.  This is distributive justice.  This looks at equality as it relates to wealth, employment, environment, housing, and so on.  The Bible is full of  tzedakah, the forgiving of debts (Jubilee), the gleaning of fields, the tithes for the poor, and so on.  Tzedakah goes beyond physical needs to psychological needs as well.  Poverty humiliates and a good society does not allow for humiliation.
It's aim is to restore dignity and independence, not just meeting needs.
There is an African proverb says that the hand that gives is always uppermost to the hand that receives.  Tzedakah strives to remove those levels.
My thoughts about justice and righteousness as it relates to creation has to do with economic and environmental issues, but it can be applied to so many situations that face us in the news today (COVID-19, social justice, and racial equality).
If we accept this from the Lord, our aim is to restore dignity AND independence.  We commit to doing justice, to upholding the laws of God and the laws of the land.  But we go further, to seek the flourishing of all people.
Distributive Justice.
Justice and Righteousness are the two virtues that DML has identified in working towards a world in which all can flourish.  We are committed to both, and we challenge ourselves to be sure that we are working on both levels with our partners.
But we can do this in our homes and in daily relationships.
I thank God for His rich word which is a lamp to my feet and a light to my path!
(To read more about this, go here:  https://rabbisacks.org/reeh-5767-tzedakah-the-untranslatable-virtue/)
Posted by The Reeds in the Wind at 1:42 PM No comments: