Poverty Eradication Myths
Bob returns from Nigeria on Thursday. Today he is beginning his third round of workshops, this time in Makurdi which is about 250 kms south (or so) of Jos. 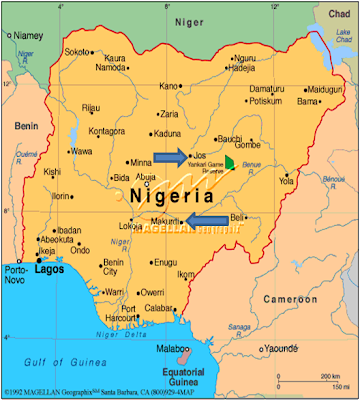 Overall he seems to be doing well and enjoying the dialogue with those he is meeting. He had one chance to get online since leaving and left the following post on Facebook:

Bob Reed In Jos now. A sobering place, so many angry people. Our workshop on justice and conflict was fitting, and we had many lively conversations. Curfew dusk to dawn. Visited the villages and areas where so many lost their lives. The city is tense as rumor fly each night about more coming attacks. Picture is of the parsonage of the church Renita and I attended while here in 2008. 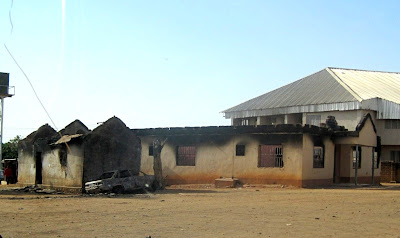 We are thankful to God that there has been peace in Jos but continue to pray for wisdom as fingers are pointed and rebuilding begins.

The rest of the family is doing well in Ghana. It’s been a little cloudier recently and the breeze seems to be picking up again, so we have hope that the rainy season (and a break from the heat and humidity) is on its way.

I want to add one more piece to the “What is Poverty” piece from last week. I just finished the book, Out of Poverty by Paul Polak, who talks about “Three Great Poverty Eradication Myths” that I wanted to share. Just as last week I commented that there are more questions than answers, we can’t help but look for answers and we all know that people have been talking about this for decades. In this book I found three responses to poverty that this author claims do not work…unfortunately, no answers here either (although I do like his approach – you have to read the book for thatJ).

1. We can donate people out of poverty. This is something that has been discussed over and over again, but we tend to continue going back to this method. Mr. Polak writes, “To move out of poverty, poor people have to invest their own time and money. The path out of poverty lies in releasing the energy of Third World entrepreneurs. The good news is that the small-acreage farmers who make up the majority of dollar-a-day people are already entrepreneurs and they are surrounded by thousands of other small-scale entrepreneurs operating workshops, stores and repair shops. All these entrepreneurs are willing and able to invest in creating their own wealth if they can gain access to opportunities that are affordable and profitable enough to attract them.”

2. National Economic Growth will End Poverty Polak writes, “If sustained economic growth does end poverty, how is it that India and China, two developing countries with admirable sustained growth rates, still have some 575 million people who live in extreme poverty, most of whom also experience hunger? It is because most of the poor people in the world live in remote rural areas that will likely continue to be bypassed by successive waves of urban-centered industrial growth…But it is economic growth in remote rural areas on one-acre farms where poor people live that we need, not generic per capita GDP growth that takes place primarily through industrialization in urban areas.”

3. Big Business will end poverty. Mr. Polak writes, “…twenty-five years ago, poverty workers saw multinational corporations as evil oppressors of the poor, and business as the enemy. Now many see them as white knights ready to slay the poverty dragon…But a multinational corporation is inherently neither of these. It is an organizational structure for doing business. If most multinationals continue to operate the way they do now, the belief that big business will end poverty will remain nothing more than a tantalizing myth…Very few multinationals know how to make a profit serving customers who survive on less than a dollar a day, who may be illiterate, and who have no access to mass media…To make an impact on poverty, big business has to learn how to provide affordable goods and services capable of increasing the income of very poor people, do it in volume, and make a profit doing it.” 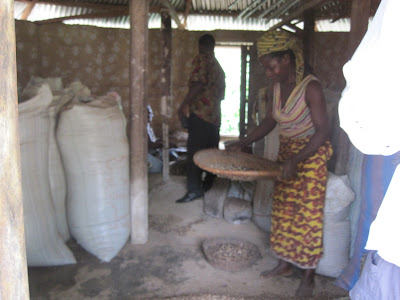 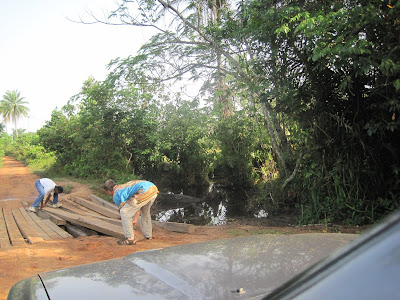 Rick Slager and Dea Lieu do a little bridge repair on our way
to the border of Cote d'Ivoire and Liberia.
Posted by The Reeds in the Wind at 7:56 AM No comments: