[One of the things that Bob and I have strived to do with this blog is to present a fair and accurate picture of West Africa, as much as that is possible for a couple of outsiders to do. When I wrote a few weeks ago that I wondered if I could do the blog without Bob, many of you interpreted that statement as my questioning my ability to handle the grammar or word choice, but in actuality, I wondered more about having a sounding board for the content we present. We never want to misrepresent West Africa, making it look better or worse than it is, promoting negative stereotypes or giving unhelpful information. This is one of those blogs that I feel like should be written but I wonder about how it will be received. This is the blog for which I need Bob’s feedback. We would debate it back and forth over the course of the week, finally coming up with something agreeable to both of us. Of course, we know that we will misrepresent West Africa. It’s impossible to not. It’s made up of too many countries, people groups, religious groups, cultures, etc. It’s too easy, especially for those who have never been to Africa, to paint the entire continent with one paint brush. So I ask you to read the following entry and pay special attention to the qualifying and quantifying words. Thanks.]

Two days after returning to Ghana, I was informed by a Ghanaian that culturally, if a husband suddenly dies, it is typically assumed that the wife had something to do with it. I immediately felt sick to my stomach. I recalled the six witch camps in the northern part of Ghana filled with hundreds of women who have been assigned blame for bad things that have gone wrong in their village and have been exiled to these camps. Soon after that conversation, I was speaking to someone in Cote d’Ivoire and asked him if that was a practice that he found in his area. He indicated that his tribe does not do anything like that, but a tribe not far from them will fine the widow a large sum of money if her husband dies, because it is assumed that she was not taking good care of him, and the extended family has now lost a source of income. (The sum mentioned could be around $10,000 US.) I then emailed several Ghanaian-Americans to ask their opinion; they quickly informed me that I should not worry about it and should disregard that information. I accepted their advice, but was still curious about the statement and the possibility that Ghanaians would view me in that light. So I decided to do a little research.

I discovered that the advice I received was correct – the information that I received can be disregarded for me as an American, but I also discovered that practice of widowhood rites (rituals) does exist for some Ghanaians, although it does vary based on the individual family, religious beliefs, education, and the relationship between the widow and the in-laws. The reasons for these widowhood rites range from love for the man to the obedience of tradition. I also discovered that Ghana is not alone in this practice – it happens in many countries. In fact, it wasn’t that long ago that women were being accused of being witches in the US either (Salem witch trials). However my focus was on Ghana and in my searching I came across a research paper that was based on the greater Accra area. The widowhood rites practices described can be applied to both men and women, however research shows that it’s rare for men to be subjected to them. These practices can be in violation of the widow’s human rights and there are attempts being made to raise awareness and lower the incidence of these practices.

Some of the widowhood rites are listed below, although variations within each do occur:

· Period of one year is observed for mourning the dead. During this year, the wearing of black clothes is observed; during that year the widow is not supposed to remarry and/or have an intimate sexual partner. At the end of this year, a memorial service is held in which the widow wears white to signify the end of the mourning period.

· Period of confinement in which the widow is kept in a room for a number of days or even weeks. The time she may come out is restricted to one time during the early hours of the morning when she comes out for a bath. The widow is made to use a stone for her pillow. The period ends with the widow being brought out to bathe with the ghost of her husband in the presence of his family. Two buckets are there and after the bath, the period of confinement is over.

· Drinking the water that was used to bathe the corpse in order to prove innocence.

· Sleeping with the corpse through the first night to show that the widow really loved her husband while he was alive.

· Crying loudly most of the time until the husband has been laid to rest. If the widow does not cry, it will be induced or forced by the family by putting pepper or some hot ointment in the eyes.

· Heckling of the widow after the burial to help the family relieve some of the pain of the loss. In most cases someone strangles the neck of the woman from behind with a cover cloth until someone from the widow’s family comes to her rescue.

· There are also reports of being forced to marry the husband’s brother, having their children taken away, and a loss of inheritance in the home and possessions.

I resumed teaching the business class that I started just before Bob’s death and this past Wednesday our topic was Biblical worldview versus cultural worldview. The 45 business owners in the class were to get into small groups and go through a number of topics: wealth and money, sickness, success and failures, women, work, time, spirits, freedom, death, etc., as it relates to the dominant cultural belief; later they were given Bible texts with which they were to compare and contrast the Ghanaian cultural worldview to the Biblical worldview. While a number of Ghanaian cultural worldviews lined up with the Bible, a good number did not (as is the case in most cultures). Specifically, sickness, failure, and death are almost always attributed to a curse or bad spirits. I informed them of what I learned regarding how I might be viewed regarding Bob’s death, were I was Ghanaian, and the room erupted as they were very surprised that I knew about that and they laughed at themselves as it relates to that belief. It was good for me to get that out in the open. I was able to contrast that with the American culture which does not seem to believe at all in Satan or the powers of darkness and therefore we need to explain everything very scientifically. One man shared the following story,

I had put in a bid for my company to receive a government contract. After my bid was submitted, I started getting sick. I believed that others who had also submitted a bid for that same contract had put a curse on me, so I went to my pastor and others and we began praying in earnest against that curse. I received the contract.

My response to him was that it seems that a blend of both cultures might be in order – both praying against(and acknowledging) the powers of darkness as well as exploring potential medical causes. He then added this to his story:

That’s very true. After I received the contract, I still remained sick. After a while, my friends encouraged me to see a doctor and I discovered that I was allergic to a particular food. I cut that food out of my diet and wasn’t sick again.

As I continue through this period of grieving, I am aware of how blessed I am in not having to fear retribution or punishment for Bob's death. My heart goes out to the many widows who do bear this burden throughout the world. 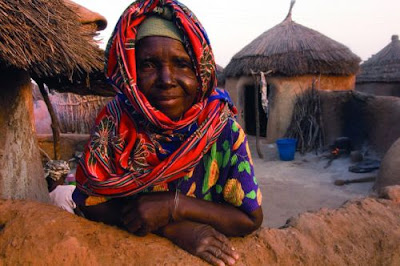 Ma'Asana Mahana, the head outcast in the Gambaga Witch Camp. 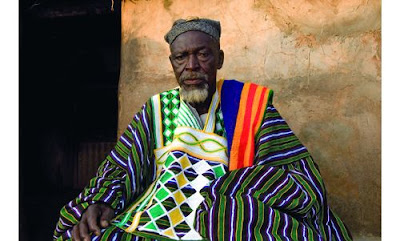 Yahaya Wuni, chief of Gambaga. An earth priest, he performs the ritual that decides if women are witches. The camp is on his land and the women work in his field and provide him with firewood.