Time for Another Trip to the Station

.
.
Ok, enough with the Monopoly images. But I've wanted to use the "Go to Jail" card since the last time I got called in for a shakedown, and today I was blessed with another opportunity.

This morning, Douglas and I headed off (note the Ford Escape to the left-- my "vehicle to extortion") to the Madina market. Now, Douglas (right, below) is a 45 year old man who is kind of a jack-of-all trades we have hired three days a week. Douglas also cooks Ghanaian food for us those days and gives me tips as I make my way in Accra. The Medina market is one of several very large-- huge-- open markets in and around Accra, and I admit to being completely enamored by them. There was nothing like this in Liberia. Liberia's largest market was a study in mob rule and 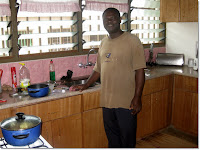 filth, a living and desperate disaster. The market in Madina is chaotic, but there is order and organization, and for the most part, it is clean. I could spend hours bargaining, teasing and listening to the folks there-- although most people I cannot understand beyond the universal language of price haggling. Markets are more than being about buying and selling. They are the quintessential human creation, and provide the engine for community.
Anyway, when we had done all the damage we could for one morning, Douglas and I headed 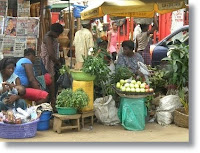 back toward East Legon where we live, stopping off for a couple of Cornish meat pies from one of the thousands of meat-pie vendors on the road. (Meat pies are very popular here, introduced by the British during their occupation in the nineteenth century.) Our mouths stuffed with flaky goodness, we headed back the way he had come. As I approached a bend, I noticed a "ONE WAY-- DO NOT ENTER" sign. I pointed it out to Douglas, slowing down to prepare to turn around. "No, no," he said, with a tone of calm certainty, "It is ok-- go ahead, go ahead."
That was my second traffic mistake in as many weeks. It turned out to be a new sign-- and 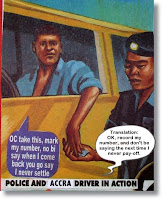 a trap. Just around the bend were about six traffic cops gleefully picking off Ghanaian offenders left and right who thought they knew better. And now they had me. They took my license, my insurance, and my registration and told me to return to Madina police station. I was under arrest.
At the station, Douglas and I waited, got shuffled around, waited some more, until finally we were led out of the main building, around back to a little shack. It was filled with young men, non-uniformed, in rather grimy tee shirts, talking loudly, and a few uniformed officers. "Ok," I thought. "It's showtime." I sat down with a chubby police woman who told me I must be "processed," and then would have to come back tomorrow and see a judge who would fine me. I said ok. She emphasized that I could not see the judge today, but stressed I would have to come back for another day of waiting and being put out. I said fine. Finally, one of the non-uniformed young men approached Douglas as if he had something important to say. He whispered something to Douglas, who bent down to me and suggested that I "meet the young man outside." I knew exactly what had just happened. The man had told Douglas that "for something small," I could go home. I wasn't buying, and told the police women at the desk I would be happy to see the judge tomorrow. 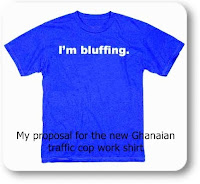 Their bluff called, they now needed a way to get me out of there without losing face. After all, it wasn't worth their time to process me with all these other offenders to squeeze, but on what basis could they release me? The smallest pretext would be enough. So I gave them one. I said, "You know, the police told me two weeks ago to have a Ghana man ride with me so I would not make a mistake. Today, I do as police say. I take the Ghana man and look! He makes the mistake and I am here."
The shack erupted with the sound of laughter. Shouting, they cried that I had said a "wonderfully true thing," and because of this, I obviously must be allowed to leave without delay. I, through my marvelous insight and humor, had earned my freedom. I knew it was part of the show, so I demurely accepted their praise. They were slapping me on the back and shaking my hands as they ushered me out and (quickly) to my car.
Thus endeth my second encounter with the Ghana police.
In other news-- if we can change the subject, we went to the symphony the other night. The Ghana National Orchesta was putting on a benefit concert and the four of us attended with the Hannah and Noah's classmates and teachers. We enjoyed it, especially when they played "Guantanamera." I couldn't help but think of the bar scene in the movie, Antz.
Finally, Dusty the Dog continues to survive. She barely eats, but we believe she is sustaining her weight. Hannah discovered that she had been badly bitten by Jack's ultra sharp puppy teeth sometime last week, and it had festered into a nasty infection. The bacteria could be contributing to her illness so Daughter and Father are now twice daily tending to the rapidly healing wound. Dusty ate some fish today, but may not have kept it all down. Stay tuned. 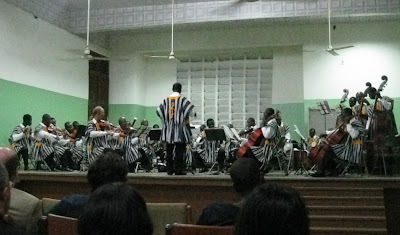 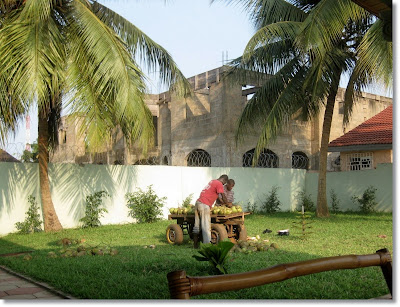 We have hundreds of coconuts, so a couple guys from the neighborhood cut 'em down and sell 'em. We get our palm trees trimmed. 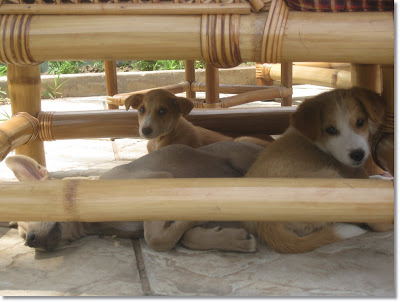 Surprise! The Reeds now have three pups-- that's Jack on the left laying down, sick lil' Dusty continuing to look pathetic in back and... Faith! A very chubby happy pooch there on the right.