A Word from Hannah, in France 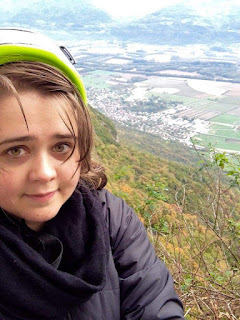 This post is from my daughter, Hannah, now 22 years old, who is studying French for one semester in France.  She is living in Grenoble, about 300 miles from Paris, and is safe after Friday night's attack. I was in a small town in Egypt with limited internet capability when the Paris attacks happened, so after checking in with her through texts, I was able to chat with her more on Sunday morning.  I expected that she might be a bit scared and a bit shaken up about what happened in Paris.  What I heard instead made me smile and think, "That's my girl!"  Her blog is below.  She has had an international life and that is coming through.  I wonder what God has planned for her in her future?

Hi everyone, Hannah here.  This blog was originally going to be about my amazing adventures here in France and, believe me, it has been amazing.  I’ve been paragliding, climbed mountains, visited some of the most historic places and seen some of the most amazing things that this world has to offer, from the Mona Lisa to the mountains and valleys throughout France.  And could, and would love to, go on and on about these things.  But there is something more important I would like to talk about.

Paris has been in the news a lot in the last couple days.  Two and a half weeks ago, I was in Paris, loving and appreciating the sights and sounds of the city.  The attacks in Paris on Friday, the 13th of November, struck a powerful cord with me in part because of that recent visit and in part because of my residence in France at the moment.  Saturday morning, I woke up to messages from friends and family checking in, making sure I was safe and okay, and reading posts from people around the world as they thought and prayed about France and Paris, those affected, those wounded, and the families of those who died.  It was touching to see people reach out in care and love to a wounded city and nation. 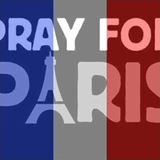 However, it didn’t take long for my sadness to be joined by feelings of anger and frustration.  As profile pictures started being changed to show the French flag, and as posts continued to pour through with prayers for France, I was struck by a sense of déjà vu; we have been through this before, as a global community, where we band together in face of a tragedy, giving our unwavering support in a beautiful moment of unity, love, and grief.  However, I don’t think we experience that as often as it is called for, given the violence that exists in the world today.

Did you know that a terrorist attack killed more than 40 people in Beirut on November 12th?  Or that on October 10, just over a month ago, 102 were killed and 508 were injured when suicide bombers bombed a peace rally in Turkey?  And how about that flight that crashed in Egypt around two weeks ago?  ISIL claimed responsibility for the 224 people who lost their lives there.  In fact, if you go to Wikipedia and look at the terrorist attacks committed in 2015, there is one almost every day.  Thankfully, few are as large as the attack on Paris, but there are people dying all around us.  And yet we do not see the posts of support, love, and unity show for some of these nations as we have seen for Paris and France this weekend.

The reason that I was frustrated Saturday morning is not at the overwhelming and amazing support shown by so many around the world for Paris.  It was because so many have died around the world who receive no recognition.  Why is it that the world begins rallying behind one nation within hours of the attack, where other nations who undergo serious attacks go almost unnoticed in the media?
We can’t spend all our time grieving, and if we paid as close attention to every terrorist attack as we did to the attacks in Paris, that is all we’d be doing.  Because even with our short attention spans, terrorist attacks happen so often that we’d be grieving all the time.  However, ignoring some countries and giving so much support to others saddens and frustrates me.  Have we become indifferent to terrorist attacks in some countries, like Iraq, Syria, and Nigeria because they happen so often?  Has the media decided for us that certain massacres are less interesting and less attention grabbing, and so are unimportant?

I am in grief and shock for Paris, a place that is now much closer to my heart than before, but I am also in deep grief for the world.  I am saddened by those who will look at this attack and use it to fuel irrational hatred towards all Muslims.  I am saddened by the refugees fleeing from countries constantly under these types of attacks, only to be turned away or suspected of committing the same attacks from which they are fleeing.  I am saddened by a world that can ignore the loss of lives in one context, only to be up in arms over the loss of lives in another.  I’m saddened by a media that seeks to entertain and boost ratings, instead of a media that reports on everything equally.  I grieve for those who lose their lives in massacres that are ignored, whose deaths are marked insignificant because death is so normal in their part of the world or because their part of the world is not attention-grabbing enough to be reported on.
Please continue praying for Paris- this is a nation still reeling in shock and grief that needs prayers, love and support.  Please continue to pray even once our profile pictures go back to normal and the news media moves on.  But please do not forget to pay attention and pray for other people in other nations who have lost their lives or who experience attacks like this far too often.  Don’t forget to send love and support to forgotten nations that suffer in relative isolation.  Keep the rest of the world in your prayers even once it stops being the trendy thing to do.
Posted by The Reeds in the Wind at 6:34 AM No comments: