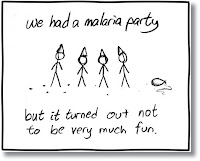 Doin' the Malaria Mash... in Me
.
.
.
,
As you know I like to be pithy, erudite and educative on all my posts, but this requires more energy than I fear I can muster. We'll see. The short version is I have malaria, which occasionally happens when folks come back from the tropics. The disease is caused by protozoan parasites of the genus Plasmodium. Five species of the plasmodium parasite can infect humans; the most serious forms of the disease are caused by Plasmodium falciparum. Falciparum lives in the gut the female mosquito and when she bites, the microscopic little creeps enter through an anticoagulating mosqito slobber, and make a bee line to the liver.
.
Patton would be put to shame after discovering the brilliance of this little bug’s strategic assault on our body. The parasite basically infiltrates a Trojan horse into our liver, where it starts duplicating itself. Meanwhile, it is sending out a cloaking signal (similar to the Klingons in Star Trek) from within this Trojan horse so as to remain undetected by our body’s immune system. In my case, there it rested, in my liver, for at least six months.
Last Monday, however, it was time to come out and party. From Home Base Liver, the parasitical creeps searched for my juicy red blood cells. Penetrating those, it started duplicating within them as well. Usually such infected blood cells would be exterminated in the spleen. So to work its way around that, each of these little demons produces as much as 60 different types of protein which, when on the surface of the blood cell, make it stickable to the surface of blood vessels, hence avoiding potential doom by not making it to the spleen. And these proteins are the first moment when the parasites become detectable to our body’s immune system. However, by the time our body comes up with some antibody, the millions of parasites are already switching to one of its other 59 proteins. The body’s immunity system becomes a toothless bystander, because the number of different and constantly changing protein combinations are essentially infinite.
Then things get gruesome. About every three or four days all the infected blood cells burst, exploding from over population and sending a wave of fever onto Yers Trooly, so that the next batch of demon creep babies can go about the body in search of fresh red blood cells again.
.
As I say, Monday the 4th of May, at around 9:00pm, was M-Day. For the next four days, I suffered convulsive shaking and chills, disorientation, high fever, extreme fatigue and body aches, and constant headache. I thought it was "just the flu," so I decided to ride it out. By the end of the week, I understood how people could die from whatever it was I had. When I noticed signs of an enlarged spleen and anemia, I began to wonder. Then colleagues Mary Crickmore and Steve Sylwulka really raised my flu doubt even more by telling me, independently of each other, that it "sounded like malaria" and "are you SURE its not malaria?" Then I realized they were probably right. I'm very fortunate it did not develop into cerebral malaria last week when I was thinking flu, because in that case Renita would be writing this post, telling you that I am DEAD.
.
Sunday I was feeling so bad I knew I needed to see somebody. We first went to a Grand Rapids Urgent Care Center. The doc there-- real nice fella-- was worse than useless, did not understand or apparently believe it could be malaria and thought maybe I was having a heart attack. Or maybe it was Lupus? TB? Talk about myopic! We left frustrated and $350 poorer. Finally, I got hold of the CRWM doc, Dr. Holwerda, who in fifteen minutes diagnosed it correctly. I started $5.00 worth of medication immediately, but am still very shaky.
.
I was lucky. In Africa malaria kills 3000 kids every day. 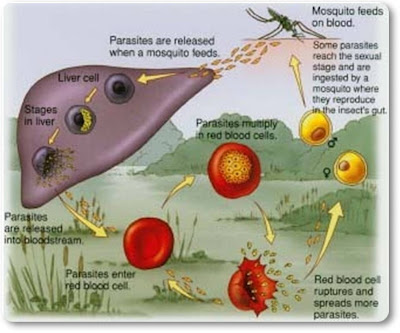 The cycle. Note the juicy explosions, both within the liver cells and red blood cells. This party cost me a few million. 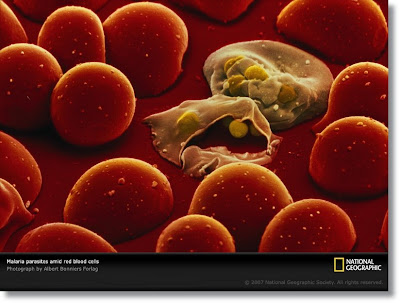 Love this National Geographic shot. An exploded red blood cell and another just about to go. Each yellowish projectile is yet another living parasite, ready to find a new blood cell in which to multiply.