The Brevity of Life: A Little Too Close for Comfort

I landed in Addis Ababa at around 7 am on Sunday morning, after a 14 hour flight from Chicago.  That plane was quite full and fourteen hours is a long time to be in such close proximity with so many people.  You hear stories from people as you wait to board, as you stand in line, as you wait to take-off, when you land, and when you de-plane.

Once in Addis, all of us in transit headed wearily to our next gates to wait for our next flight.  The same woman, who had pushed by people getting on and off our plane, was pushing ahead again.  What was her hurry?  The young man who shared that he had put his life contents in storage to spend one month in Kenya to see how it worked out strolled to the gate with the young woman he had been talking to - I don't think they were together though.  The mom with the very busy and very cute little two or three year old daughter (who spent much of the flight squealing and laughing - which is SO much better than crying) hustled to the gate as well. 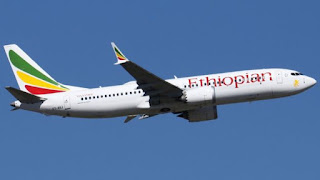 Gate 8 was the flight to Nairobi, Gate 9 was my flight to Dar Es Salaam.

Right after they had boarded for their flight to Nairobi, we were called to begin boarding our flight.  Once we were all on the plane, we sat and waited.  And waited.  We were told that we would be waiting for about 45 minutes.  I thought it a bit strange as I didn't see a line of planes waiting to take off, and we were staying right in the place where we had boarded - not taxiing up the runway to get in a queue.

But we finally started moving and I did my best to read another paper for my dissertation before catching a few winks.

Once in the airport in Dar Es Salaam, my phone began buzzing.  I love that my phone knows enough airports that it just automatically connects (as I'm always on airplane mode when I travel and have to rely on Wifi).  After clearing immigration, I waited for my luggage and checked my phone.

Breaking news from BBC:  Ethiopian flight from Addis to Nairobi crashed and there are no survivors.

I immediately felt sick.  I had just seen those people.  Just stood next to them.  Just talked to some. Just overheard some of their conversations.  And now, they are dead.  Gone.  Pictures from the crash site show absolutely nothing left from this plane that was less than four months old, and had only been airborn for this particular flight for about six minutes. 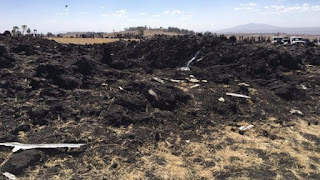 And I start thinking about Michael.  And my kids who have already lost their dad.  I have never feared planes - I actually enjoy turbulence as its a bit like a roller coaster ride - and I would be happy to go down in a plane (as opposed to the slow decline my poor father is experiencing).  But I would have an issue with leaving my kids parentless for the rest of their lives.  Or Michael as a widower.

As I drove in the taxi to the guest house, I had to keep telling myself to stop thinking about it or I was afraid I would have to tell the driver to pull over so that I could be sick.  Once in my room, I let myself think and process and grieve.

I'm now thinking that we were waiting to take off because the news of the crash was getting to all pilots and maybe they had to wait to rule out terrorism before letting more planes fly.  (In hindsight, I'm a little uncomfortable that we only had to wait 45 minutes...)  I wonder if the flight attendents knew and had to keep a brave face, knowing their colleagues just died - or whether they were not told.  It seemed to get out on the news pretty quickly.

And I think about those families from 33 different nations receiving this news with horror, unbelief, and fear.

And then my mind shifts to the team of people that are joining us in Kenya in this next week, many of whom will take that same flight from Addis to Nairobi, and some of whom will be coming to Africa for the first time. 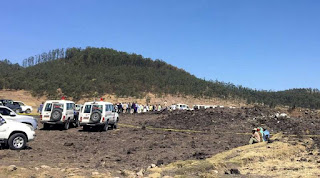 The brevity of life.  We all know it.  We all lament it when we hear of such tragedies.  But every now and then it hits a bit close to home.  Close enough to create some discomfort in the heart despite the logic in the head.

We recognize how quickly life can just be over.  We know that to live is Christ and to die is gain.  We know that we have not been given a spirit of fear but of power, love and a sound mind.

The sound mind reminds us that Ethiopian Airlines has a very good track record of aviation safety.  This plane was only four months old (that is troubling for other reasons) - this was not negligence.  Love says that we continue to do what God has called us to do despite the risk.  The power of God reminds us that He is in control - we are to be obedient.

Please pray for the families who lost loved ones as well as the team that will be traveling from the US to Nairobi this week.  And please pray for the investigation team that is going to be looking into why two new Boeing 737 Max have crashed shortly after take-off in the last five months.  Answers will make us all feel a bit safer about traveling.
Posted by The Reeds in the Wind at 12:25 AM 1 comment: