From the Justice Corner

,
.
The world is seeing a hunger crisis it has not seen in half a century. An additional 100 million people in developing countries have fallen into poverty because of rapidly rising food prices, pushing the total number of people in extreme poverty to more than 1.4 billion, according to a 2008 USDA food security report. The UN says that the total number of undernourished people in the world is just under one billion.
Apart from i

t being an obvious and compelling humanitarian issue, US government administrations have for fifteen years recognized that world poverty is a national (and international} security issue. Poor states often fail to meet the basic needs of many of their citizens—for food, water, health care, or education. The same poor states that cannot fulfill their responsibilities to provide security and sustenance to their own people may also fail to exercise effective sovereign control over their own territory. Poor states often lack the capacity to control borders or remote areas to prevent plundering of their natural resources. For example, the “blood diamond

s” taken from Sierra Leone were used by Liberian despot Charles Taylor to secure weapons through links with Al-Qaeda and Libya. Because of Taylor, Osama Bin Laden prospered. Today in Liberia, we read of timber and rubber being stolen in large numbers by forces committed to destabilizing the country. 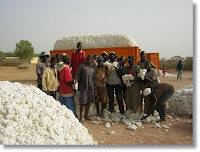 nvestment in developing nations is a good idea to help impact hunger. But it is much more than that. According to the UN and the World Bank, reductions in rural poverty generally correspond to an overall reduction in poverty. Agriculture fuels economic growth, provides skills and jobs, and stimulates manufacturing and service sectors. Agricultural development is not only a key to ending hunger, but ending poverty and providing greater security as well. These are a few more reasons why it is important that we care, that we get involved in combating poverty and hunger.
I’ve said before that I believe there are better ways to support hungry and poor people around the world than by merely offering food, relief aid or money

to their communities. The overwhelming evidence is that communities in poverty are not transformed by gifts, money or food. Neither are communities of wealth transformed by merely trying to “fix poverty” by contributing to this kind of intervention. Communities of poverty and wealth are transformed from within. Groups like CRWRC, CRWM, and Partners Worldwide are effective because they understand this. Far better to help others grow their own food and create their own agri-business, than to simply provide it from US subsidized surpluses. In doing so, the poor develop a greater sense of self-efficacy and empowermment, and the wealthy develop a greater humility and awareness of the complexities involved in real partnerships. Africa CRWRC team works with local organizations in Mali, Senegal, Sierra Leone, Nigeria, and Niger, to build the capacity of farmers to grow crops that not only provide food for their families, but contribute to the economies of their countries.
. .
I ought to 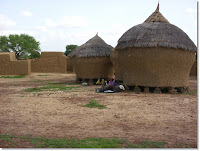 add that agricultural development is only one area where our West Africa team is active. The team is involved in community development, church development, peacebuilding, justice advocacy, good governance and conflict transformation. But I wanted you to know today that none of this good work will get very far without the men and women who spend their lives digging soil for a living. That’s why we need to dig them too.

The pictures above are random shots of farms in Nigeria, Niger, Sierra Leone and Mali. That one just above us shows grain banks, storing millet for the lean times. Below are a few more from the collection of my West Africa boss, Mary Crickmore, in Mali. 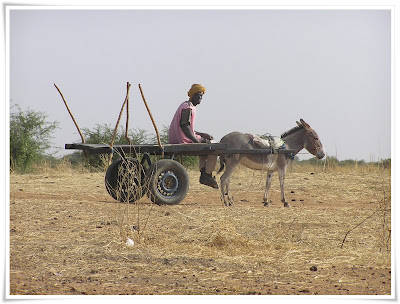 Taken by friend and former CRWRC Mali consultant Winston Bosch, this is lovely afternoon shot-- what's he waiting for Winston? 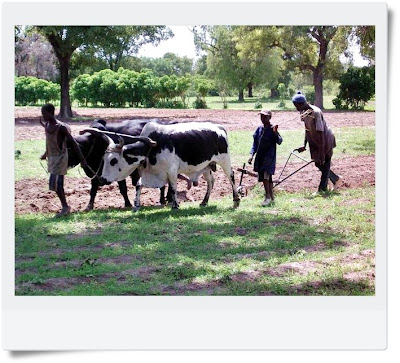 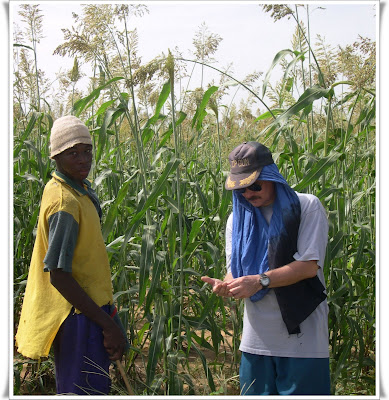 Mary's other half, Scott Crickmore, and Fulani farmer in Mali checkin' out the sorghum.