How cool is that - to give an update on Bob's work, nineteen months after his death.  I have been so struck by the number of people who have been impacted by his life and his words, even if the encounters were only brief.  So in light my recent reflections on what would have been our 21st wedding anniversary, I thought I would pass on some of the continuing work of Bob, beyond our family.  Included in this blog are some pictures of him that didn't make it to the blog.

Yesterday I heard a wonderful testimony of the lasting impact of Bob Reed's work here in Nigeria.  Just before Bob left here after his 2010 trip he gave Gideon Gogo of Beacon of Hope the notes from the Justice workshop he had just presented.  He decided to give it to Gideon on a UBS drive just as he was leaving for the airport instead of sending it by email later.  Now that material is being published by Beacon of Hope, incorporated into their new Justice manual which came out of their motivation and insight following Bob's workshop.

We want to express our condolences to the Chomock family and the West Africa Ministry team of CRWRC with Zakka's death on October 29.  Zakka was another passionate warrier for justice and I'm sure he has left a powerful legacy as well.

This past August, I met with the head of a foundation and she asked about my family. When I told her about Bob, she asked if I had a picture of him.  I showed her one and she said, "I think that's the man who saved my family!" Bob had only met with her and her husband once, but what he had said was so important for the situation that they were dealing with, that it changed the course of their family.  She later wrote the following to me in an email: 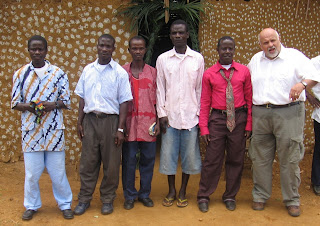 I talked to the person who recommended that counselor for us so many years ago and it was indeed your husband Bob. He was a youth pastor that also remembers word for word some advice Bob gave him. My husband remarked that when someone speaks those kinds of memorable, time- tested recommendations they have a gift of giving words of wisdom, like Solomon did when the two mothers each claimed the child was hers. Your husband has a great legacy.

From Joe Kuilema, professor at Calvin College,in the Social Work department, sent me the following email on August 30:

Kristen, Rachel and I just returned from a whirlwind five days in Liberia.  We attended the pinning ceremony for nurses, lab techs, and social workers at Mother Patern, as well as the larger Stella Maris Polytechnic graduation ceremony.  It was a blessing to be able to attend, and see the first generation of professional social workers in Liberia graduate.  At their pinning ceremony, a spokesperson for the class referred to them as the "Pioneers" and I think that sums up the situation well.

We also wanted to write you to let you know that at the ceremony, Joseph Kpukuyou had the audience observe a moment of silence for Bob, recognizing that none of this would have happened had he not initiated it.

Andy Ryskamp, the Director of CRWRC, met with me shortly after Bob's death and assured me that the Bob's passion for Social Justice would continue in the organization.  I asked him recently if he could update me on how that was going, and this is what he wrote on October 6:

The work of CRWRC is slowly coming under more of a justice theme. I am sending a draft of our current plan and hopefully it comes through in it. But here are some bullet points.
- As communities mature we are working with them to focus on systemic issues they encounter as bottlenecks to their development
- At country levels we are partnering with Micah Challenge to focus on anti-corruption/transparency
- We are emphasizing peace and reconciliation training for staff
- We have a justice cluster focused on advancing the justice initiatives and sharing learnings throughout CRWRC.
- CRWRC has staff linked in to the Office Of Social Justice so that the CRC can do effective advocacy on issues related to world hunger
- Over 100 churches have participated in advocacy with us over the past year.

There are so many more stories that people have shared with me - especially those whom he counseled - either his words helped to save their marriage, save their life (from suicide), prevent a marriage that would have been disastrous, etc.  I know we would all like to believe that our work will make a difference and carry on after we pass, but for many of us it doesn't happen.  I'm thankful that the God-given gifts of Bob's are carrying on.  I wonder if Bob would be surprised.
Posted by The Reeds in the Wind at 1:52 AM 1 comment: