"A Problem For Every Solution"

Since beginning my work in Egypt, I have heard several Egyptians say that Egyptian pastors have "a problem for every solution."  I certainly know that there are people in the world who are like that - glass half empty people, as they are sometimes called - but I wondered whether this was more a statement of frustration than actuality.

I can't say that I've come up with an answer for the veracity of this comment.  Two visits to Egypt can't reveal that type of information.  But I have made an observation of some of the differences of pastors that I have encountered in Egypt, versus Kenya, Ghana, or North America.  The message of Discipling Marketplace Leaders was not received in the same way in Egypt as in these other places.  Egyptian pastors seemed to react defensively and stated that their relationship with their business people was very healthy, despite the very verbal anger and frustration heard from Egyptian Christian business people toward the Church.  There seemed to be a lack of willingness toward self-reflection on the part of the pastors.

This could be explained by the fact that the Church in Egypt is 2000 years old, as compared to the relatively young Church of Sub-Saharan Africa. Age and precedent can make thinking "outside the box" more difficult.

But there were also a number of "problems" that were brought up for every solution.  Some of those problems listed below are quotes from the pastors as they processed whether Discipling Marketplace Leaders was a ministry that could work in their church:
You can see a challenge here.  Rather than viewing themselves as the leader of the Church, and the under-shepherd to the people, the pastors seem to present themselves as victims of the culture and victims of their members.   This may be a result of what has been describe to me as part of a "siege mentality," which is more of a position of "we are under attack" and therefore walled off.  A siege mentality may include a sense of not being able to think or plan too far ahead as the future is so uncertain.  A siege mentality can show itself in defensiveness and victimization.  Wikipedia describes a siege mentality as a "collective state of mind whereby a group of people believes themselves constantly attacked, oppressed, or isolated in the face of negative intentions of the rest of the world....the result is a state of being overly fearful of surrounding peoples, and an intractably defensive attitude."

I think we sensed that in Egypt.  By the end of our trainings we were left with a remnant of pastors who seemed to understand the need of Christian business people and be open to going to next steps. But the response was underwhelming compared to the overwhelming responses that we've seen in other places.

What does that mean for the work of Discipling Marketplace Leaders?  That is something I have been processing for the past week.  I think it means a couple of things.  First of all, the Church in Egypt needs our prayers.  Working in a Muslim majority, having undergone several revolutions, with threats around from Muslim extremists is challenging enough.  But some of the hidden threats come from within - a deep seated fear that has paralyzed church leaders, or positioned them in such a stance of defensiveness that they are unable to hear truth, even when presented it by their own members.

Secondly, I think it means that the need is even more present in Egypt than in the areas that are so readily willing and able to run with this ministry.  Sure, it's easier to work with those who "get it" immediately.  Sure, it's easy to say that we should "shake the dust off our feet" if not experiencing a great welcome.  But that is surely not what we are called to do as Christians when it comes to building the Church.  We are called to preach, to teach, to equip.  We are called to pursue, just as we have been pursued by Christ.  It is for us to be obedient and leave the results up to God. 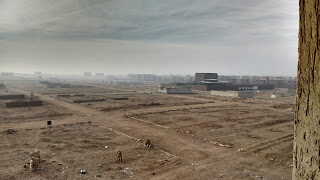 While I was on my last visit, I learned that only 3% of the land in Egypt is used.  The rest is deemed "wasteland."  The picture shows the dry land just outside of Cairo where one of conference centers was located.  It is incredible to me that only 3% of one million square kilometers is used by 82 million people.  As we traveled from Cairo to Minya, you could see the miles of desert stretching for miles.  This is not a land where people have historically had a "problem for every solution."  This is a land where people have historically found a solution for every problem. 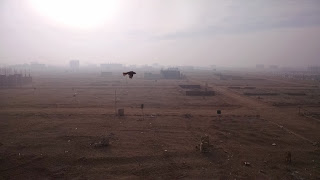 After snapping the picture above, I turned and snapped another one.  This one caught the sun rising, along with a bird.  I didn't try to catch those - I just got lucky.  But it reminded me of life and work and ministry - like the dry land, it can seem challenging and even hopeless - full of problems and lacking solutions.  But the tenacity of people, the inherent beauty of the earth, along with the gifts provided from God that are surprising, can make it beautiful.  We lift our eyes and keep going.  We keep trying.  And we trust God to bring the joy, restoration, and beauty.

In this time of Thanksgiving, I am thankful for each of you who continue to pray for this work.   Please continue to pray with me to be people who see solutions to problems, rather than problems to every solution.