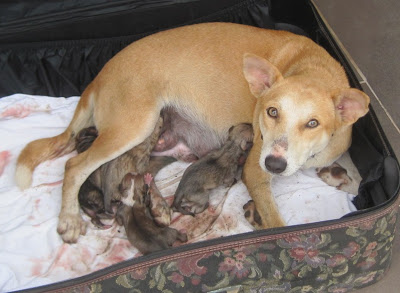 Sunday morning was an exciting morning at the Reed household. After waiting for four years, we finally are happy to announce the birth of new Reed puppies.

If you remember in Liberia, Bob eagerly prepared several times for Nikki to give birth, but she fooled us at least twice with false pregnancies. (To see those posts go to http://reedsinliberia.blogspot.com.) Earlier this year, in the beginning of March, Faith miscarried. Then when we came back just a couple of weeks ago, both Faith and Dusty were pregnant. Sunday morning, for whatever reason, they both gave birth.

When I went out to feed the dogs, I found Dusty in the garden with four pups. I moved them into a more comfortable home ( an old suitcase), got my coffee and sat down to watch. Four puppies plus three dogs - suddenly we had seven dogs in the yard. I then noticed that Faith was looking a little different. After doing some exploration, I found two puppies that she had given birth to but unfortunately 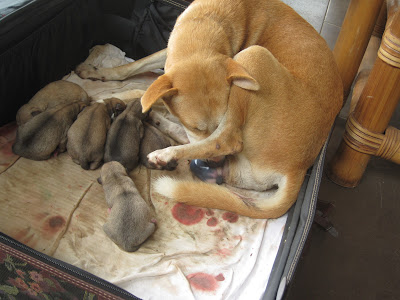 both were dead. I buried those, then came back to my coffee and to watch Dusty, who suddenly had five puppies. Hannah and Noah began to get up, and by the time they came out to see the puppies, we counted seven (plus our three, now ten dogs in the yard). Noah noticed that Dusty seemed to be contracting again. Thirty minutes later, we watched Dusty give birth to another pup - the only black puppy with white feet and white-tipped tail. [Picture shows this birth.] Unfortunately, it was not breathing and did not survive. But we were still glad that we were able to watch one birth - even though it was a little gross. I did videotape it but we all decided it was not the kind of thing to post on the blog. It's amazing how instinctual it is for a mother dog to care for a new born puppy.

Here is Dusty with her seven pups - all of whom seem healthy and all of whom seem to look like Jack. Dusty seems to be a good mom, thus far. If you remember, she was the dog that almost died. Bob worked extra hard to keep her alive and would not give up on her. He would have loved to see her as a proud momma.

Ten dogs might be a little much for us to handle...Anyone want a puppy? 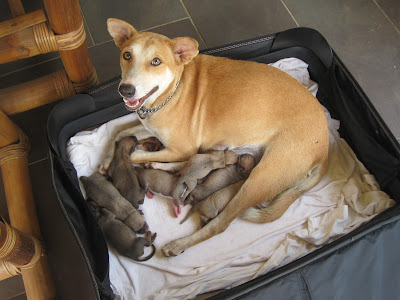