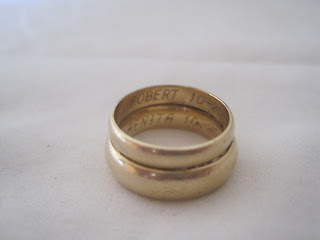 Well, here's a little about the story.  When we said good-bye to Bob in the hospital, I took off his wedding ring and immediately placed it below my wedding ring, just to make sure I didn't loose it.  His ring was bigger than mine, so mine kept his in place.  I kept it there over the next week and after the memorial service, realized that I liked wearing both.  So I went to a jeweler, had his ring resized to fit my finger, welded the two rings together, and had the jeweler engrave a cross over the two rings.

I love wearing these rings because I feel like I am carrying on the marriage.  You see, for me, I still feel like I am married to Bob.  Our marriage was about more than just the two of us - it involved the children as well as our calling from God.  I still feel like we are raising our children - even though he is absent, the same principles, beliefs, and traditions are carried on in our home.  I am still living out our calling and trying to do the work that we were called to as a couple.

There is an additional reason to wearing the ring.  It does provide some form of safety and security through the implication that there is a man attached to me.  When I am asked by men in West Africa where my husband is, I tell them he is traveling - which is not a lie as I'm sure Bob is enjoying the vastness of heaven.

There are some that say that wearing the ring beyond one year means that I am living in denial.  I don't know how that could possibly be true (of course, that's exactly what someone living in denial WOULD say:-).  I am VERY well aware that Bob is no longer here.  One would have to be severly mentally or emotionally disturbed to think that wearing a wedding ring is sufficient to delude oneself that one's spouse is alive.

My decision to keep wearing these rings may change when both of the kids are out of the house or maybe when I move to a different place completely on my own without Bob's input. Maybe I'll never take them off.  I don't know.  I know that when it feels right to take them off, I will do so.

[FYI - I lost the diamond from my engagement ring after nineteen years - just three months after we moved to Ghana and six months before Bob died.  After searching all over for it, Bob concluded that it probably was appropriate that it returned to the dust of West Africa, since that may be where it came from.  Sad though.]
Posted by The Reeds in the Wind at 2:37 AM 2 comments: