Our Faith is Gone

Sorry, folks.  Couldn't resist that title.  Actually, Noah's friend, Armand, suggested it for this blog.  The good news is that our faith in our Lord and Savior, Jesus Christ, is not gone and remains strong.  Our faith in our dog, Faith, however has been wavering for some time and resulted in her leaving for another home last week.  As a reminder, Bob got Faith when we thought that Dusty was dying; Bob worked really hard to save Dusty, and she ended up surviving, leaving us with three dogs instead of the preferred two.  However, Dusty and Faith did not get along - Dusty was always fighting with Faith, and in the end it wasn't a nice life for Faith.  So we hope she is happy now in her new home.

Hannah has returned from Italy and had a great time.  She now wants to learn Italian and live in Rome for a year - at some point in the future.  She is dealing with a serious case of senioritis as she deals with her last few weeks of school, while her peers in the US are almost done with school already or are given the option to not do exams if they have good grades.  She is not given that option and has to go until June 9.  But with graduation, open houses, summer job, and Calvin College all coming up, she has a lot to look forward to. 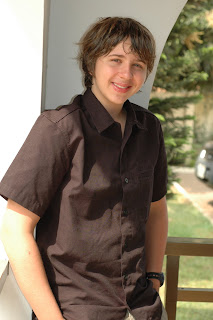 Noah has to be reminded that he doesn't have the right to senioritis yet and has to wait until next year, although there does seem to be somewhat of a contagious aspect to this ailment.  He took his SAT last week, was accepted to the Summer Academy at Calvin College for the summer, and is looking forward to getting to the States for a few weeks, to have some down time as well as have consistent electricity and water for a while.

As for me, I have realized that, according to Aesop's Fable,  I am more of a hare than a tortoise.  After Bob's death last year (which was seven months following the stress of a new position and a move to a new country), I told myself that the first year of grief was the hardest and I needed to survive that first year.  Which I did.  I survived - I continued in my job, continued living apart from family and friends, continued living in a foreign land, and continued parenting.  Once I passed that first year, I was then left with the question of, "What now?"  What is my next goal?  Surviving is not enough - how do I live?  I've now been told that for some the second year is the most difficult, for others the fourth, others the sixth, and so on.  So I'm looking forward to getting back to the States, having a silent retreat, and going to some grief groups with other widows and widowers who can help me "normalize" what I'm going through.

In the meantime, this week we will be hosting Jeremiah Yongo, the Partnership Manager for Partners Worldwide from Nigeria, who will be here on a learning trip and then will be traveling to Liberia to spend some time with LEAD as well.  Last week, we hosted groups from Grand Valley State University as well as the University of Indianapolis, so the work, the dialogue, the challenge, and the message continues on.

Blessings to you all this week.
Posted by The Reeds in the Wind at 4:44 AM 1 comment: