There is a place in Ghana called Sodom and Gomorrah.  It is a location where approximately 40,000 people live in dire conditions.  Bob first wrote about this place in a blogpost in 2009 when the Ghanaian government threatened to plow it down (great piece if you want to read it - "This may sting a bit.").  They are threatening again because of the recent deaths in Ghana, which is blamed on the flooding caused by trash from this location.

I have often wondered about the name given to this depressed area.  Ezekiel 16:49 seems to make it very clear what the sin of Sodom was:  "'Now this was the sin of your sister Sodom: She and her daughters were arrogant, overfed and unconcerned; they did not help the poor and needy."  Doesn't sound like a place impoverished by poverty, disease, and no sanitation to me.  Sounds to me like...well...like other places in the world that are quite developed. 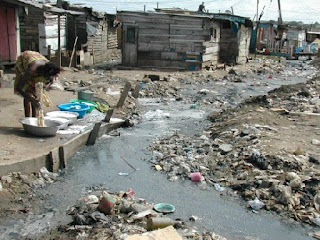 June 26, 2015 was a day of terror in many parts of the world.  Syria lost 120 lives due to IS.  Kuwait had a bomb go off with IS claiming responsibility.  Tunisia lost lives, believed to be linked to IS.  Somalia lost lives due to al-Shabab.  France lost lives due to terrorism.  IS spokesmen have called for an intensification of attacks during Ramadan and to spread beyond Syria and Iraq. So many people in so many countries living lives of inescapable hardship, oppression, fear, and anxiety.

And yet it is summer vacation in many parts of the world.  A time for family and cottages and vacations and play and fun and food.  And while I love a good vacation as much as the next person, I am struck by the lack of opportunity for any vacation by the majority world.  Ever.  Ever ever.  Ever ever ever. I just returned from a trip to Ghana, Kenya, and Egypt. Ghana which was touted as a great place for development but has been struggling so in the past few years with a currency that is crashing and electricity that is off more than on.

Kenya has seen the Kenyan shilling falling significantly against the dollar - lower than it has been in many years; al-Shabab continues to threaten; tax rates are oppressively high; and significant poverty continues to be a problem for so many.

And Egypt, where being a Christian is met with outright hostility; where the pressures and stresses of life are palpable and dark.

So it's no wonder that on the day that I re-enter a world that is "on vacation," it feels heavy and I can't sleep.  Ezekiel 16 plays in my mind, "arrogant, overfed and unconcerned."  How I don't want that to be the label for the era in which I live.

There is serious work to be done by the Church.  Our battle is so far from over.  Yes, we must pace ourselves and enjoy the "tithe of feasts" with family and friends (Deuteronomy 12).  But let us not label depressed places with dark names, like Sodom and Gomorrah; let us not forget that the majority world never gets a vacation and being able to take one is an absolute privilege; let us be stewardly with the blessings that we enjoy, and be wise with how we justify how much of our resources we keep and how much we give away; and let us not forget that many of our brothers and sisters around the world are in a battle for survival, for their faith, and for their family in a way that the majority of North Americans will never truly know or understand.
Posted by The Reeds in the Wind at 7:03 AM No comments: