The background on my laptop is this picture: 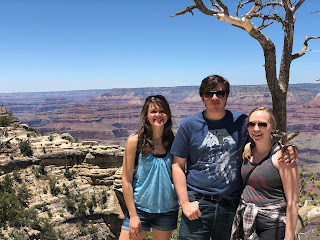 How I love these faces.  How they make me smile each time I look at this picture.  Their personality shines through.

It was ten years ago this week, on March 20, 2010, when Hannah was 16 and Noah was 15, that our husband and father, Robert Allen Reed, was taken from us so suddenly.  I relive that day often.

How much he has missed in seeing his children grow and mature. 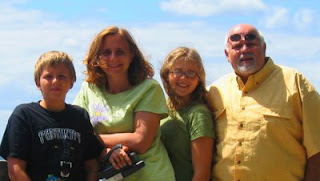 How much they have missed in having the words of wisdom, love, and encouragement from their earthly father.

What would he say to each of us today if he could?  What we would each say to him?

There is not a day that goes by that he is not mentioned or missed.  Not a single day.  And there is so much more to come...so much more that will be missed by him.  And that continues to be heart-breaking.

While death can lose some of it's sting with time, the hole made by that person's premature departure is never filled.

I still talk with him in my mind.  I get angry with him now and then for leaving too soon.  Every now and then, I tell him that he better be advocating on behalf of his children to God - that he better not be enjoying heaven so much that he forgets about us down here.  I miss his quick retorts, the mischievous look in his eye, his passion for justice, and his love of God. 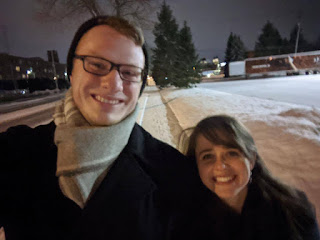 Update on Hannah:  Hannah is living in Grand Rapids and has been working with a very effective program in treating children with autism.  However, now that she has her MSW she is looking for opportunities that will allow her to become a licensed social worker, which requires 4000 hours of supervision.  She has been interviewing and we are praying that she will find additional work that is a satisfying as the work she has been doing, fitting within her gifting and calling.  She has also been dating a young man, Matt Koster, from Grand Rapids for a short time as well, who seems to be a very good fit for her!  (What would Bob ask Matt as the protective father he was of his little girl?  I've tried to play that role but could never do it like Bob!)  We are thankful to God for the blessings in Hannah's life. 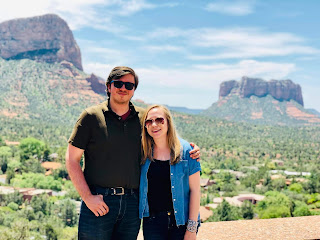 Update on Noah:  Noah is still working as a background investigator in Washington DC.  He has been promoted a few times and is completing his fourth year there.  He has been dating his girlfriend Hannah Birmingham for five years.  (What would Bob ask Hannah as he sought to get to know his son's girlfriend?)  Hannah works with International Justice Ministries in DC as well.  They are considering going for their Masters together at some point.  They are also a very good fit for each other and we are thankful to God for her as well!

I told my kids when they were young that they "weren't allowed" to get married until they were 27 (like I could really stop them!).  I said that so that they would really know themselves and know whom to choose for a lifetime partner.  I'm thankful that so far they have listened!  (Even though they remind me that I was 21 when I married their dad!  That's when "do what I say and not what I do" comes in handy!)

As for me, I made it home on Saturday after a busy three weeks in Cameroon, Burundi, and Zambia.  Due to the international travel (including a 17 hour flight from Addis to Chicago with a few hundred people from all over the world where social distancing is impossible), I am self-isolating for 14 days.  I'm assuming it is nothing but want to err on the side of caution.  The BAM conference in Thailand at the end of April has been cancelled, as well as a workshop we were to do in Germany.  The next trip to Africa is also up in the air depending on how things go regarding the virus in the US and Africa.  So far Africa seems to be fairing the best of any continent, but that could change.

What would Bob say about this virus?  I don't know, but I believe he would agree with what C.S. Lewis wrote: 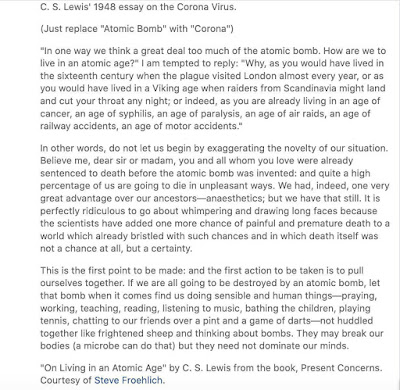 Posted by The Reeds in the Wind at 8:09 AM No comments: