Asking for Prayer for a Pillar

Anyone seeing Mary Springer would not think of a "pillar."  Mary is petite, blond, with an open caring face.  She is always ready to break forth into a smile or laugh that lights up her eyes, and those same eyes are equally willing to fill with tears because of her very compassionate nature. 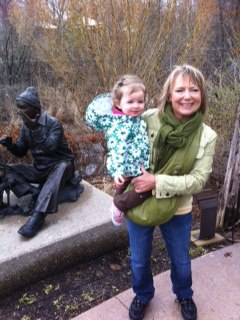 If you have been involved in my work in any way - West Africa, East Africa, Canada, the US - over the past eight years, you may not know but Mary has been praying for you, faithfully.  FAITHFULLY!

And now, Mary, who has been fighting cancer for several years (and when I say fighting...I mean F.I.G.H.T.I.N.G!) has entered into hospice care and it seems her fighting days may be nearing a close.

So I'm asking you to join me in prayer.  Prayers for healing because God is able!  Prayers for an ease of the significant pain that has racked her body for some time.  Prayers for her peace of mind.  Prayers for her husband and children.  As her pastor put it, Mary is "outwardly wasting away; inwardly being renewed."  Her faith is strong, even now.

I have known Mary for many years, as a fellow member of Madison Square Church.  But I didn't really get to know her until she came to Liberia in 2006 through our church partnership, to participate with a children's ministry called Pebbles and Stones.  It was there that I got to know Mary better and learned what a prayer warrior she is.  Shortly after that, we asked Mary to join our weekly prayer call for the work of business development.  Mary prayed about it, confessed that she didn't "know much about business" (even though she runs her own counseling practice), but that she is willing to commit to prayer.  At that time we had a group of maybe seven or eight people who called in weekly for prayer.  Over those years, people have dropped off, one by one.  But not Mary.  Even though the focus shifted from Liberia to Ghana, then to West Africa, then to Kenya, she stayed.  Even though her life changed and she went through normal life challenges, she stayed.  And throughout her fight with cancer (I think she was diagnosed in 2011), she still didn't stop joining this prayer call (except for a handful of times when she was just too sick), as well as participate in any meeting we had in Grand Rapids about business development and discipleship.  That, dear friends, is faithfulness.

And now it is Dave Graf (who has been in these prayer calls since 2006), Mary Springer, Michael and myself who are on this prayer call weekly at 7 am on Tuesday mornings.  We have become very close because of this.  Mary prayed me through the loss of my husband Bob; prayed for my children as they mourned their Dad and went through numerous transitions since then; prayed me through the changing of jobs; through the challenges of development work in Africa; through the fear of getting into a new relationship with Michael; and fervently for many businesses by name, as well as many country issues in West and East Africa.  It wasn't unusual for her to tell me at the end of a call of a vision or impression that she had for me, that ministered to me in one way or another.

And so I'm asking for prayers for this faithful sister in Christ today.  Will you join me and stand in the gap for her, as she has done for so many people over the years?  Someday she will meet the people she has prayed for over the years, as you may also meet this woman who has prayed for so many.  We look forward to that day with confidence.
Posted by The Reeds in the Wind at 7:27 AM No comments: