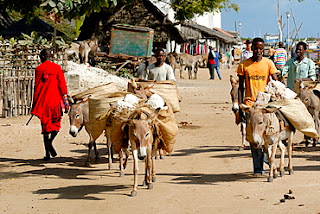 Donkeys are ordinary, awkward creatures.  They are normally used in many parts of Africa as pack animals, for carrying or pulling things.  They are sometimes kept as calming companions for nervous horses.

While often perceived as stubborn, donkeys will freeze when they are scared.  They prefer to plant their feet to analyze a situation rather than run in a panic.  I can't tell you how many times I've been driving in Africa only to come across a donkey standing completely still in the middle of the road.  Instead of being this being stubbornness, donkeys show a limited reaction to fear, sickness, or pain.

If I had to choose between being a donkey or a horse, after all I've seen on how donkeys are treated, I would want to be a horse.  Horses are considered to be "magnificent" and "stately" and "elegant."  Horses are admired, well-kept, and seem to be treated with great love.

But did you know that donkeys are very intelligent with a great memory for routes?  They are also described as "fiercely loyal" to those they trust.  They are described as "smart, personable, and affectionate." 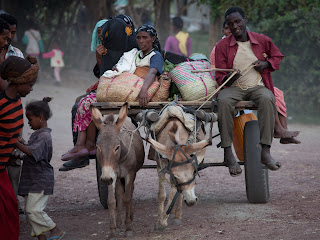 They are less flighty than horses and eat a lot less, so more economical as well!

Beyond which animal I would want to be, which would I choose to ride?  Probably the horse still.  It is taller, giving more of a view.

But Jesus selected to ride into Jerusalem on a donkey instead of a horse.  Why might this be?

Theologians say that this is a fulfillment of Zechariah 9:9, but that doesn't tell us why. a donkey is selected.

The donkey was also used in agriculture and trade, not the horse.  Jesus spent the majority of his adult life in business and trade.  He would have been much more familiar with donkeys than horses.

Too often I want to be a horse.  I care more about power in a battle than humility of service.

Too often, like a horse, I want to carry important people rather than carry stuff.

Too often I focus on the wrong things - the outward appearance rather than the inner attributes of loyalty and intelligence.

Too often I look down on donkeys and interpret their quite stillness as stubbornness rather than recognizing the truth of fear and what is going on beneath the surface. 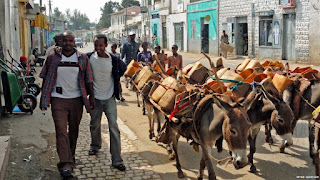 Too often I am more concerned with how I am treated than with being sure that I am serving with humility.

Lord, I yield to your invitation to be one of your donkeys, to embrace being unimpressive.

1 Corinthians 12: 9-11:  But he said to me, "My grace is sufficient for you, for my power is made perfect in weakness."  Therefore I will boast all the more gladly about my weaknesses, so that Christ's power may rest on me.  That is why, for Christ's sake, I delight in weaknesses, in insults, in hardships, in persecutions, in difficulties.  For when I am weak, then I am strong.

Posted by The Reeds in the Wind at 5:30 AM No comments: