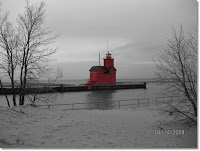 .
.
For a week or so I've been feeling rather melancholy. I'd say it's a sadness bordering on painful much of the time. I get this way every now and then, and being a psychotherapist, I know I could call it depression if I was in a clinical mood. But I'm not in a clinical mood. To label this as "depression" is to pathologize it, to turn it into something merely to be prevented or cured. And yes, initially, when this thing hits, I get grumpy and restless, short tempered and impatient. I don't like the way I feel and I want to feel better. I want to be cured. But when I realize the sadness and emptiness is not going away just yet, I settle into it. I look for truth and meaning in it. I come to value "being here now". There is something important here. There is spiritual and emotional reality here. Being low quiets me down, brings me into the present, and gets me more in touch with the painful side of being human. Inevitably, I see it as a gift.
So folks, Yers Trooly has the Blues. It really is the reason I haven't posted to the blog this week. I wanted to-- I was thinking of the few of you who check in on us, but I could not muster the energy to make something up for you. I didn't want to fake it.
.
Yesterday, I drove out to Lake Michigan, which is one of the most important places in the world to me. This particular place has a well known lighthouse, and it's deep red color seemed to pierce the grayness of the day-- and my inner ache. It's boldness and audacity pleased me. It couldn't care less about my darkness, it was just going to be there, red, in my face. Later, I found myself out on a pier marveling as I watched the loons and a duck I have never seen before diving for fish in the frigid waters. I felt privileged to be in their presence. Later still, I talked to God as I walked the beach, and, as is typical, He had no word for me. He just listened, and I imagined and thought I could sense an infinite smile. I walked the beach, breathed the cold air, and allowed myself to weep a bit as I considered the world I've come to know. "So beautiful" I thought. "So much pain."
.
And then it was time to drive back to Grand Rapids and home. I'd like to say the trip cured my blues, but they are still here, keeping me honest. However, I did find the energy to simply be real. Which I figured is as worthy of posting as anything I could make up. So thanks for sticking with me.
.
By the way, I took some pictures while on my walk. Here are a few. 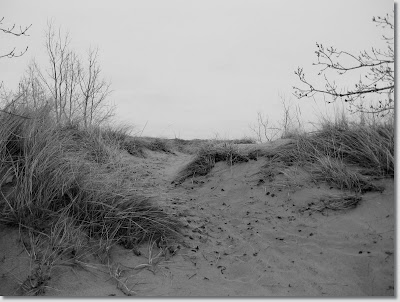 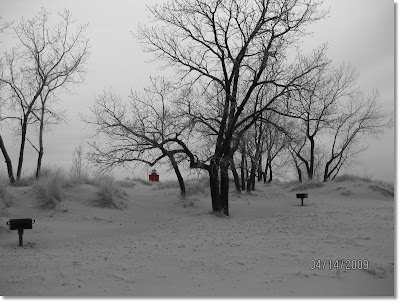 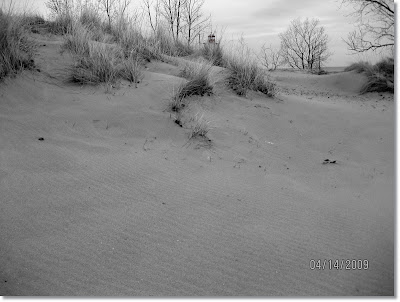 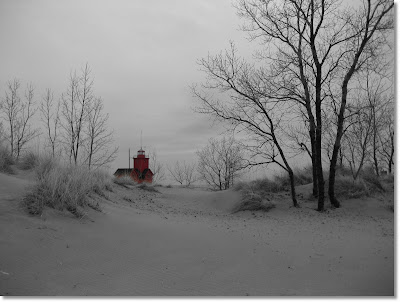 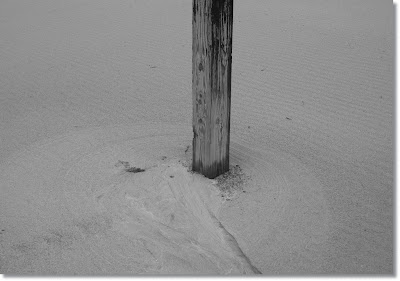 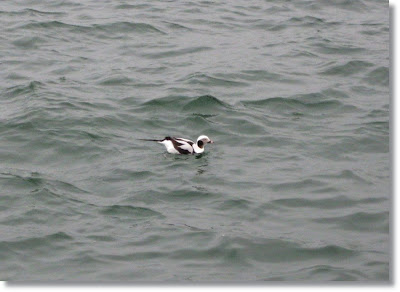 Hey-- who can tell me what kind of duck this is? (Update: thanks to friend Ron Boes who knows a male Long-Tailed duck (Clangula hyemalis) when he sees one.)