This May Sting a Bit

I don't Think He was Kidding

For a long time I have lamented how, for so many American Christians, life is mostly about creating a safe, comfortable life and happy home for family-- and that is the end of the matter. As if Christian scriptures extol the virtues of the America Dream, instead of the hundreds of references to pursuing justice, especially as it relates to the poor and oppressed. As if Micah really said “ …And what does the Lo

rd require of you but to pursue comfort, to worship family, and to walk happily with your Stuff?” I sometimes wonder if those of us from the United States and Canada understand the extent, severity and nature of poverty. I think this must be the case, because if we examined how destructive, painful and flat-out wrong it is, more of us would be troubled, especially when we look out from our relatively cozy viewpoints of plenty. It cannot be that we see and understand how so many destitute humans live day to day—often as a result of our own decisions—and we simply disengage by choice from the misery of poverty. It cannot be that we do not care enough. I hope not.
.
I’m thinking that in the US, our nonchalance about poverty might be due to the perception in the US that “poor people don’t have it so bad.” After all, there is plenty of US census data out there that most of the 12% of US Americans classified as “poor” by the government are making it. Few are undernourished-- only 2.5% of poor children are stunted in weight and height, and only 7% of poor households report that they “sometimes” or “often” do not have enough food to eat. According to the US government, 73% of the nation’s poor own a car, 80% have air conditioning, 64% have a clothes washer, 89% a microwave, 97% a color TV—62% with cable or satellite, 25% have a big-screen TV-- 78% have a DVD or VCR, 89% have phones. So maybe being poor is not such an ordeal. Maybe this is the mindset of many middle to upper class American Christians.
.
However, in Ghana, and West Africa, and throughout the continent of Afr

ica, poverty is a whole different animal, and I do not see how we can miss it. Poverty in Africa means destitution. It means gnawing hunger, stunted growth and starvation. It means thirst and foul water and disease. It means anger and frustration and humiliation and despair. Poverty in Africa destroys hope, creativity, and the will to continue, and it is everywhere. Millions of people in Africa have never known a single day without the shackles of poverty. Millions more will die as a direct result of the effects of poverty. 30,000 die every day in Africa because of their poverty. 6000 a day from HIV-AIDS. 3000 kids a day from malaria. A fifth of all African children will die before they reach their fifth birthday. With all the access we have to our world today, it possible so many Christians are unaware of these monstrous facts?
. 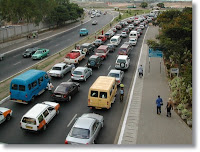 Even here, in rapidly developing Ghana, poverty boggles the senses. Ghana is often touted as a beacon of development and a model for the entire sub-Saharan continent, an “island of peace and stability.” Indeed it is well on its way to achieving the Millennium Development Goal of halving poverty and hunger by 2015. But halving poverty in Ghana still means millions remain without enough food, water, adequate shelter, or access to health care or economic opportunity.
.

In Ghana, poverty is concentrated in the northern part of the country; some people talk about “two Ghanas:” the Ghana of the south, more wealthy, growing, developing, looking more and more technologically advanced with each passing year, and the Ghana of the north, lagging behind, waiting for better roads, waiting for investments, waiting for change, waiting.
.
But even the south suffers. Just a few miles away, in the heart of Accra, is an area known as Old Fadama. Old Fadama houses some 30-40,000 souls in conditions almost as bad as can be imagined. With no electricity, no water, no sanitation, the area has become an open sewer—literally a cesspool. Citizen of greater Accra have given Old Fadama another name—Sodom and Gomorrah, because with the poverty has also come drugs, violence, prostitution and a home base for criminals. The government has for years issued ultimatums and is currently threatening to evict the squatters and bulldoze the place—but where would the people go?
Amidst the squalor and poverty of Old Fadama, and of other

places throughout Ghana and West Africa and the continent, it is impossible to escape the simple, staggering humanity of every single boy and girl, man and woman. As Christians, we are supposed to care about this. Many do. But surely, suffering of this magnitude, on this scale by fellow human beings ought to be a concern of all serious Christians. Surely we cannot be aware of this colossal injustice, inequity and pain and refuse to identify ourselves with it. 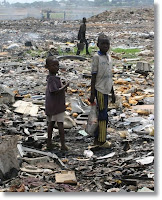 It scares me. Because if most Christians do know, if most of us have an awareness of the numbing suffering due to injustice and poverty in this world, and we choose to look the other way, what will Christ we say to us in the end? More frightening, if we avoid the poor, the hungry, the thirsty and instead choose lives focused primarily on serving ourselves and our loved ones—lives characterized by the pursuit of comfort, predictability and security—how can we possibly think of ourselves as serious Christians?

Or am I misreading the words of Jesus:
"When the Son of Man comes in his glory, and all the angels with him, he will sit on his throne in heavenly glory. All the nations will be gathered before him, and he will separate the people one from another as a shepherd separates the sheep from the goats. He will put the sheep on his right and the goats on his left.

"Then the King will say to those on his right, ‘Come, you who are blessed by my Father; take your inheritance, the kingdom prepared for you since the creation of the world. For I was hungry and you gave me something to eat, I was thirsty and you gave me something to drink, I was a stranger and you invited me in, I needed clothes and you clothed me, I was sick and you looked after me, I was in prison and you came to visit me.’ Then the righteous will answer him, ‘Lord, when did we see you hungry and feed you, or thirsty and give you something to drink? When did we see you a stranger and invite you in, or needing clothes and clothe you? When did we see you sick or in prison and go to visit you?’ The King will reply, ‘I tell you the truth, whatever you did for one of the least of these brothers of mine, you did for me.’

"Then he will say to those on his left, ‘Depart from me, you who are cursed, into the eternal fire prepared for the devil and his angels. For I was hungry and you gave me nothing to eat, I was thirsty and you gave me nothing to drink, I was a stranger and you did not invite me in, I needed clothes and you did not clothe me, I was sick and in prison and you did not look after me.’ They also will answer, ‘Lord, when did we see you hungry or thirsty or a stranger or needing clothes or sick or in prison, and did not help you?’ He will reply, ‘I tell you the truth, whatever you did not do for one of the least of these, you did not do for me.’ Then they will go away to eternal punishment, but the righteous to eternal life.” Matthew 25:33-46

Isn't Jesus saying that He lives today in Old Fadama? Is He not saying that it is He who hungers there, He who drinks bad water, and He who has no toilet so He must relieve Himself where He can. Is He not telling us that He is sick and in a prison—and who sees Him? Who even is willing to look? Further, it seems that He is saying He expects us to look—and much more.

Across the ocean, the richest, most advantaged , most educated, most fed Christians in the history of the world live and worship. Many of us are indeed grateful for all God has given. I know some wonder how to give back. I know some want to do more. I also know it often ends there. We get distracted by the lives we have made for ourselves. I think about what we could do if we all looked beyond ourselves, our families and our comfortable distractions. If we determined to do something.
.
It might help to remind ourselves about what its like for so many of the world, and if we remembered Who really lives in places like Old Fadama, waiting.
.
We look away from Him at our peril.
Posted by The Reeds in the Wind at 1:58 PM 10 comments: