Being in Ethiopia during this trip has been like a breath of fresh air.

On April 2nd of this year, a new Prime Minister was appointed, following the sudden resignation of the previous Prime Minister.  I was in Ethiopia when this happened but I had no idea of the significance of that event.  On this trip, I feel like I'm seeing a different people - a people with hope, a people who believe they have a leader who is for them, a people who are developing confidence in the future.

Let me explain first through an example.

I was picked up for lunch on Saturday by a colleague who is becoming a dear friend.  He told me that a former dissident was arriving in Ethiopia today so traffic would be very busy, necessitating us to have lunch close by.  When I asked about the person coming, he shared that this was a person who had been outspoken about the former Ethiopian government.  He said that if this person had come a year ago, he would have been jailed or killed.  But today, he is coming in as a hero.  Apparently, 20,000 people are expected to turn up to hear him speak.  As we drove, we saw people walking with a flag that had the same Ethiopian flag colors but was lacking the emblem.  In 2009, this was forbidden by the Ethiopian government and would have resulted in fines and imprisonment.  Today people were walking with that flag in masses. 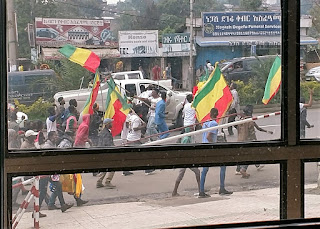 I've been in many countries where there are demonstrations, and when those happen there is often a fear of violence.  But today it felt so different.  We sat in the restaurant, facing the street, and we saw wave after wave of people walking by, holding these flags.  My friend said to me, "This is like a dream come true."  He went on to share that never in his life (he is in his late 50s) has he seen this type of freedom in Ethiopia, where people can express disagreement without fear.  I immediately teared up upon hearing his words - peace is something that I take for granted in the US; the right of free speech is vigorously protected.  To witness this moment of a new freedom in Ethiopia felt like a holy privilege. 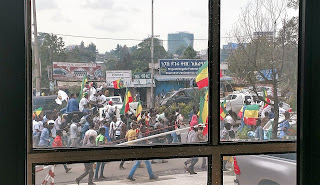 ce April, he has done what seems to be an amazing job at undoing many of the injustices from the previous administration.  The BBC stated that he has been changing Ethiopia at an "unprecedented speed."  Everyone seems to speak of him with such awe and joy.  He is a humble leader, articulate, educated, intelligent, sensitive, compassionate, and the list goes on.  I listened to him speak to his own people who are demanding that their language become the second official language of Ethiopia, and heard him challenge them on their underlying motive for this.  It was an impressive speech.

But there is a new fear that I heard from many, and that is the fear that something might happen to him.  There have been threats, especially as he is bringing people to justice for previous abuses; there has been a loss of power of a few who still hold much of the countries resources.  This new breath of fresh air is still taken with a sense of caution, with a question of whether it will last.  The fear that it would disappear or be taken away is legitimate. 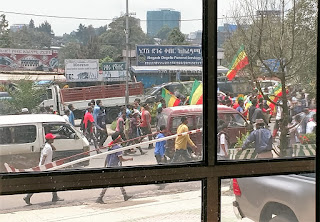 Maybe you will join me in prayer for the protection of this leader, as well as for the protection of his work toward peace and justice in this great land?  And continue to pray that soon this freedom may go beyond Dr. Ahmed to all the people, becoming a movement that will be held by all.  And pray that as people gain strength and confidence in living in newfound peace and harmony, that the peace of God may rule in their hearts and their minds.

What a privilege to be here during this time!  May God bless this land that is rich in history, in resources, in culture, and in opportunities for people to be co-creators with Him!
Posted by The Reeds in the Wind at 10:36 PM No comments: