It's time for a word from Yers Trooly...

Weather:  This is the best time of year in Ghana in regards to weather.  The highs are in the low 80s; the lows in the mid 70s.  Despite humidity in the mid-70%, there is a constant breeze, which actually makes it feel cool at times.   Very enjoyable!

The Reed family has settled into what will be the new routine for this next year.  Hannah has started classes and her new job, and seems to be adjusting well to Calvin College.  Noah is adjusting to being the only child at home, being a senior, and balancing homework with extra-curricular activities.  Renita is adjusting to being without Hannah (thank God for Skype!), and entering what will most likely be the last year in Ghana, with a lot to accomplish before leaving.  This was a busy week of "resettling" in after being gone for ten weeks, and hopefully this new week will feel a little more normal for all three of us.

As we approach the eighteen month mark since Bob's death, I figure it's time for a word from him. Recently, I ran across a number of writings that were in a file on his computer - I'm so thankful that he was a writer and I can keep hearing his voice through these words.  He was the primary writer of the blog and would occasionally ask me to write an entry, so quid pro quo. He wrote this in June of 2009 - I searched the blog and didn't find it there, so hopefully this isn't something you have seen before.  He wrote about six disciplines - I will only put three here and save the other three for another time.  Enjoy! 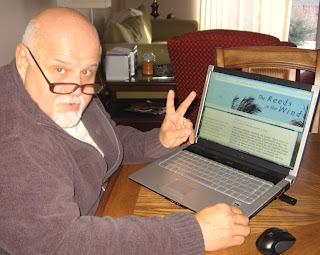 
The Discipline of Sacrifice


(Phil 2.3-8) Ironically, discipline itself requires sacrifice— for instance, physical exercise requires that we experience the pain and boredom that sometimes accompanies it, or the discipline of scripture memorization requires that we take time and effort that we could use elsewhere.   But here I’m thinking of the discipline of sacrifice itself-- that is, intentionally making sacrifice a part of our spiritual activity.  More than anything else, when I think of sacrifice I think of Kenosis, the Emptying of Christ.  As Christ emptied Himself, so we too are to empty ourselves-- sacrifice ourselves—on the altar of love.  Giving ourselves away, giving ourselves in His service, making choices to deny ourselves for what is best for those around us—this is the discipline that Christ modeled for us. As I think of it, it seems that true sacrifice brings on suffering, so perhaps it’s not so much as the sacrifice but the suffering that is the mechanism here.

While I’m at it, I want to make another point.  Giving—even big-time giving—out of abundance is not really sacrifice.  Oh I know, if I own ten thousand cows and I sacrifice a cow on an altar, that cow is a sacrifice—but not to me. It’s really only a sacrifice to the cow.  Something given is not a sacrifice unless means something, unless I lose something in sacrificing it.  A billionaire who gives millions to some cause may be a hero, but he’s likely not making much of a sacrifice.  If he gave 900,000, he’d still be a millionaire a hundred times over.  No, Jesus was amazed by the widow who gave everything she had.  If our giving of time or self or money doesn’t hurt, it’s not sacrifice.  Sacrifice, particularly of those things to which we find ourselves attached, free us from fear and bring on new opportunities to see God afresh.

The Discipline of Suffering


(Lk 9.23; Rom 5.3-5; 2Cor 1.6,7; 2 Tim 1.8-12; Jas 1.1-4) There are two kinds of suffering that I think of here—one is suffering that we have no control over, and therefore is not a discipline that we impose upon ourselves.  This suffering remains important however, because it still gives us opportunity to exercise our faith.  So we need to receive it and “count it all joy...”  The other kind of suffering is suffering we enter purposefully, knowing it will yield fruit.  There is a great deal written on this, and when I think of suffering as a discipline, I don’t necessarily think of asceticism or self-flagellating activity. I think of the suffering that might come when we choose a better behavior, or it may come by our choosing to deny certain behaviors.  I think of the hard choices God calls us to that we tend to automatically say, “I can’t do that.”  I think the fact that we say “I can’t do that” probably suggests that we suspect the thing is a good thing to do in the first place.  I believe we are constantly called to do things we don’t think we can do—like give up some distraction, or enter into a fast, or follow His leading to a new level of obedience, because through this, as Paul and James and others remind us, suffering strengthens us in our spirituality.  The entire season of Lent is, I think, supposed to be an extended time of self-imposed suffering by self denial.

The Discipline of Silence (with Solitude)


(Psalm 46.10, Isaiah 30.15) I probably don’t need to write much here.  I believe most people would benefit from intentionally seeking extended periods of quiet. Most people are pretty noisy, I think by nature. By noisy, I don't necessarily mean verbally, but rather noisy internally, as if our minds have no "Off" switch. There is a steady stream in the mind, asking, "Now what is there to do?" or "What's next?" For some of us, quiet is unacceptable, and for others, it is downright terrifying. Most of us literally do not know how to quiet down for more than a few moments at a time, and even if we did, we'd choose not to.

Among my greatest mentors of silence are the Desert Fathers. The Fathers-- and Mothers-- were groups of Christians who lived in the 4th and 5th centuries in the deserts of Egypt. They are remembered today for their extreme asceticism and their remarkable words. Some of their sayings are like Zen Koans, beyond rational analysis or critique, at once inaccessible and yet immediate and powerful. Other sayings speak directly to the heart and mind, and refresh the soul. They spoke about holiness, sacrifice, true spirituality, love-- and the deep wisdom found in silence. Here are two of the thousands of their sayings, and two of my favorites:


A certain brother went to Abba Moses in Scetis and asked him to speak a word. The elder said to him, “Go and sit ‎in your cell, and your cell will teach you everything.”‎

Abba Theophilus, the archbishop, came to Scetis one day. The brethren who were assembled said to Abba Pambo, 'Say something to the Archbishop, so that he may be edified.' The old man said to them, 'If he is not edified by my silence, he will not be edified by my speech.'

Posted by The Reeds in the Wind at 2:10 AM No comments: