Last week, Hannah and I drove to Wisconsin and then to Iowa to visit some of the North American partners who are working with us in West Africa.  (News flash:  Hannah got her drivers license!)  While in Iowa, I had the opportunity to share with a great group of people from various businesses and churches about the work of development and partnerships in West Africa.
One of the things we discussed is the perception of poverty.  I shared a story about a time when we were in Liberia and were traveling through a village.  We rounded a corner and there was a small boy, sitting in the dirt, playing with a rusty soup can that he had turned into a car, using cutouts from a used "slipper" (we call them flip-flops) for the wheels, and a dirty string to pull that car.  I remember the immediate sense of sadness that this young boy was playing with this rusty "car".  Later on I reflected on that feeling and I wondered where it came from.  The boy looked happy.  He was smiling as he played.  He was not wishing it was a Fisher Price or Tonka Truck.  He was content.  But because of my perception of how toys are supposed to look, I projected a dissatisfaction onto this boy.  That night I received the following email from Rich Haan, one of the members of the Global Business Affiliate of Partners Worldwide for Côte d'Ivoire (printed with his permission):

I had an immediate flashback to January 2008, Daloa, Côte d'Ivoire when you told your toy story this afternoon.  I've attached a pair of photos I took of a boy and his "truck."  The boy was having such a blast with his truck --- who would have known a kid could have so much fun with a truck that didn't run on batteries! 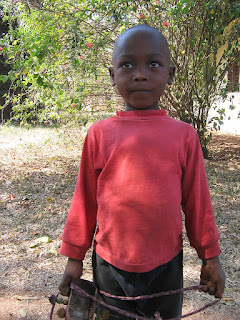 Although I only spent a few weeks in Côte d'Ivoire, it became more obvious than at any previous point in my life that possessions or material wealth are not keys to happiness.  I "knew" that to be true, because it's "the right answer", but I didn't really thoroughly understand it until I was taught by some of the folks in Côte d'Ivoire.
So many people think the connection with the Ivorians is a one way street --- the North Americans give --- and the Africans take.  A lot of people look at me like I'm from Mars when I talk about it being a two way street.  There are things North American have to offer Africans --- but there are just as many things they have to offer us.

I could talk with you for at least a good three days about Côte d'Ivoire, the 18 Mountains Region and the incredible people there. 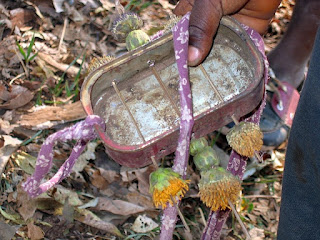 It's been very difficult the last year watching what went on with the whole election fiasco in Côte d'Ivoire.  Horrendous things happened to such beautiful people --- and for what reason?  My continued prayer is for healing, reconciliation and restoration.
Rich

I love that Rich took the time to share this with me.  It reminds me of why I like the mission of Partners Worldwide - it's not about "us" helping "them" - it's about us growing and learning together - discovering new perspectives, which can only happen when we work at being true partners with each other.  While speaking at a lunch about Business as Mission in Sioux Center with about 18 business persons, one person exclaimed, "We need that here!".  Amen.

Posted by The Reeds in the Wind at 2:48 AM No comments: