"The US is not a Christian nation, and it never has been."

In recent weeks, I have been spending time with Christian organizations whose goal is church multiplication:  one church for every 1000 people.  This is a lofty goal and it sounds great.  But it

evoked a deeper question for me.

What kind of churches are being created?  We can have one church for every 1000 people, but what type of transformation will those churches bring to our communities, cities, and nations?  The authentic mark of the Global Church is transformation in people, who then have an effect on their environment.  However, churches do not necessarily bring transformation.

Kenya is an example of a people who claim to be 80% Christian, but according to the Transparency International survey of corruption, they are also "80% corrupt."  How can this happen in a country so full of Christians and of churches?  I would argue that more churches are NOT the answer, but the answer lies in churches who disciple and release their people to BE the church every day of the week.

If churches don't necessarily bring transformation, what does?  Recently in the US, there have been people speaking with longing of a time when we were more of a "Christian nation."

But can there actually be 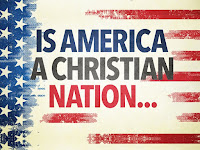 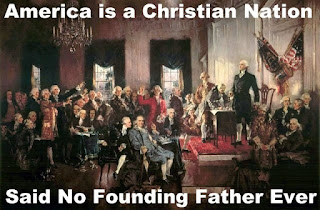 Last week, our pastor, Joy Bonnema, preached a sermon about nationalism and patriotism.  She said, "The US is not a Christian nation and it never has been."  She stated that faith cannot be legislated by the government.  She cited cases where when religion has been legislated, and it has often been disastrous for "the foreigner," whom we are instructed to love (think crusades, slavery, etc).  We love to think that the US was founded as a Christian nation, but our own constitution at that time did not give rights to women, to Native Americans, and African-Americans were considered to be 3/5ths of a person.  These principles are not Christian.  The Founding Fathers of this country desired separation of church and state, as well as freedom from the religious wars.

But she said that the US is not a Christian nation NOT because of those things, as terrible as they are, but because no government can declare a nation to be Christian.  It doesn't work that way, because to be Christian means to be "in Christ."

And then Pastor Joy said words that rang deep in my soul, as it is our tagline for Discipling Marketplace Leaders.  She said, "Jesus' vision was not to establish a Christian nation.  It was unleashing the Church, that is empowered and enlightened by the Spirit, to bear radical witness to the Kingdom of God.

Therefore, no earthly government can quash the Kingdom of God.  It doesn't matter who the administration or its leaders happen to be.  She said that the greatest threat to o 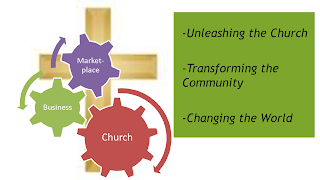 ur faith and our witness isn't from any government but from our own sin and our failure to live out the witness of God in all areas of our lives.

The way God ushers in His Kingdom is not through legislation but through living it out our faith every day of the week, in every area of our lives.

Do I hear an amen?

A pastor in Kenya, after going through our training, said, "Church begins on Monday.  Sunday is maintenance/garage time."

If we are planting those kinds of churches, then let's get busy because the transformation of our communities won't be far behind.

This week I speak at a missions conference in Kansas City and am praying for good dialogue about this!