This past Friday was the second Work as Worship Retreat, put on by RightNow Media.  While I was disappointed that my church decided not to participate, I was thankful that across the country more than 11,000 people participated in many local churches.  I'm additionally excited that RightNow Media is partnering with Discipling Marketplace Leaders to replicate the Work as Worship Retreat in the countries where we are working in Africa in May of this year.  It is a great event to explore the concept of doing work as an act of worship, and it then opens the door to go from that event to the next step with people in discipleship. 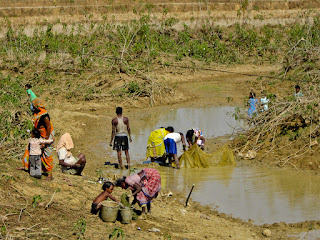 Francis Chan started the day talking about watching people washing clothes in muddy water or even drinking muddy/murky water.  He reflected on how that muddy and murky water must be doing something or people wouldn't be using it.  Somehow it is cleaning the clothes.  Somehow it is relieving thirst. But that water can't be doing all it could do, were the water to be clear.  He was comparing it to his teaching, which is like muddy water, as opposed to hearing directly from the word of God, which is like clean, pure water.

I felt that way about many of the speakers of the day.  And also about myself.  Much of what we do is presenting muddy water.  It can do some good - it can accomplish something - but nothing like the penetrating word of God.  As Paul says in 1 Corinthians 13:12, "Now we see things imperfectly, like puzzling reflections in a mirror, but then we will see everything with perfect clarity.  All that I know now is partial and incomplete, but then I will know everything completely, just as God now knows me completely." (NLT) 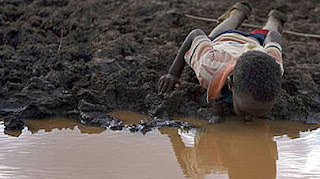 And that is what I love about the message of DML.  This is not a new message or our own ideas but it brings us back to what God intended in the beginning.  We present it through the medium of muddy water, but we point to the pure water of life that will cause people never to thirst again.

1 Corinthians 3:4 says this though:  "For when one says, "I follow Paul," and another says, "I follow Apollos," are you not mere human beings?" Paul is pointing to something greater within each of us who have agreed to follow Jesus.  He is challenging us to understand that we are not to behave like mere humans, as we have been given the Spirit of God which exists in and through us, manifesting to speak to the common good. 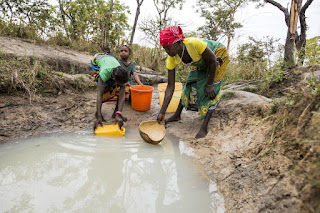 1 Corinthians 12:7 reminds us that "to each one the manifestation of the Spirit is given for the common good."  To each one.  Not just to those who work in churches.  Not just to those who work in Christian non-profits.  To every person.  We are to remember that we are to demonstrate the spirit and power of the Living God, not acting as mere humans.  We are not to do this with arrogance however, as 1 Corinthians 1:17 and 2:2 says, but with fear and trembling.

Francis Chan also shared the story of when he started his first house church and watched it grow from 10 to 20 people, from 20 to 50, from 50 to 100, then to 1000, then to 2500, then to 5000.  As they reached capacity in their building, growth began to slow down, to maybe 100 people per year.  He said this about that time:  "People were coming to church but just sitting there.  And it was costing a fortune to have them just come and sit there.  I had a sales force of 5000 and we were making 100 sales per year.  If I was in the workplace, I would be fired because I'm a terrible sales manager.  I'm spending a fortune on running this church for 5100 people but I'm not getting a return on my investment."

A return on investment in the church.  Members as part of the sales force of Jesus Christ.  Can we talk about such terms with the institutional church?

I think we can and I think we need to.  The message received on a Sunday morning needs to be turned into application and transformation throughout the week, otherwise it is simply information.

What would happen if churches were more intentional about discipling people to do their work as an act of worship?  I am talking about real discipleship - not just preaching on the topic once or twice in a year.  Many pastors and church leaders say they do this for their members, but many members I talk to do not agree.  It is rarely reflected in official programming of the church and even more rarely reflected in the budget (which is where the church's real commitments can often be seen).

Churches spend a lot of time helping to develop our personal relationship with God and with others, both of which are very important.  But our relationship to work and the creation was part of the curse as well and the workplace is where we spend most of our adult lives.  This relationship needs to be restored.  Christ has redeemed it - we need to reclaim it.  To not speak to this issue in our churches in an intentional way is causing a great gap and lost opportunities.

Muslims have figured out how to integrate their faith and their work.  There has not been the same dichotomy between what is sacred and secular.  For Christians, it's not too late for us to begin doing this more intentionally as well.

We may do it with muddy water.  We should do it with fear and trembling.  But we should also remember that we are not "mere humans."  We have the capacity with our muddy water to point people to the Living Water.
Posted by The Reeds in the Wind at 7:39 AM No comments: