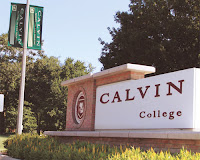 Hannah moved into Calvin College last week.  For those of you who don't know, I am an alumnus of Calvin, class of '90.  Bob worked at Calvin for 16 years, starting as a Resident Director of the dorm, "Noordewier-Vanderwerp", where Hannah is now living (not a coincidence:-).  Bob's leaving of Calvin College was not easy, as it was not his choice.  In 2001 we felt called to send our kids to the local public school, which had been slated for closing, and act as parent advocates for this school, labeled as "failing".
However, faculty are required to send their kids to Christian Schools, and despite our explanation of following what we believed to be God's call to join with our neighbors, Calvin College denied our request for an exception to this requirement and Bob left.  Bob had appreciated the way that Calvin handled this dialogue and even though he disagreed with the decision, he felt that he had been treated with respect.  We had discussed, prior to his death, what we thought about the kids going to Calvin.  I was actually not in favor of it -
Calvin is strong academically and theologically, but I wasn't sure that it would help her grow spiritually.  Bob, on the other hand, thought that Calvin would be a good experience for them.  Hannah wanted to go to Calvin, especially because it was in her home town and was therefore a familiar place, but I had been urging her to check out other options.  Shortly after he died (in fact, on the plane ride home for his memorial service), I told her that I would definitely support her if she chose Calvin.  Being around familiar people who love her and being close to her church will be good for her.  I'm so glad that Bob and I had discussed this before he died - it's great to know that Bob would be okay with that as well.

It was very different to be back at Calvin and to hear things through the ears of a parent, 20 years after graduation.  I was encouraged by what I heard and how they care about the character development of the students, not just the academic development.  I was encouraged at how they challenge students to ask questions and think through all aspects of life, and not just float by giving easy answers.  It was also good to see so many faculty and staff that have fond memories of Bob and promised to care for Hannah.  She is in a good place.

I made it back to Ghana on Saturday and was very thankful to be reunited again with Noah.  He weathered the last couple of weeks pretty well, with the help of his friend, Armand, and their family.  He is enjoying being a senior, as well as being a Teacher Assistant, working on the yearbook, and is getting into debates wherever and whenever he can.  We again have seven new puppies to care for - pictures later!
Posted by The Reeds in the Wind at 5:27 AM No comments: