This is the last of three blogs that I wanted to put out, telling the story of several Christians who are living out a quadruple bottom line in their work.  I hope that it shows how every Christian, in every workplace, can have a quadruple bottom line to fulfill the Great Commitment of Genesis 1 and 2, the Great Commandment of Matthew 22, and the Great Commission of Matthew 28.  We believe the world would look and operate differently if every Christian was able to set goals for an economic, environmental, social and missional bottom line, which is reinforced and supported by the Church when gathered.

Michael is a 46-year-old mechanic who has been working on vehicles since he was a boy.  His father was a mechanic, as was his uncle, and his older brother.  He likes to say that grease runs in his veins!  The business is a small family business, on a corner lot on the outskirts of town.  Michael grew up in the church, but he had not seen much overlap between his faith and his work until his church started a workplace ministry.  Since going through the DML class in his church, he has made and applied a quadruple bottom line to his work and his home. 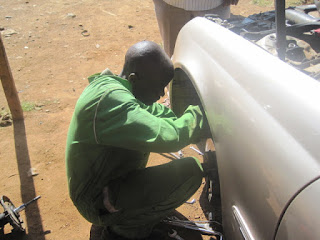 We thank God for people like Michael in this world who do their work as an act of worship, with the goal of seeing those around them flourish!