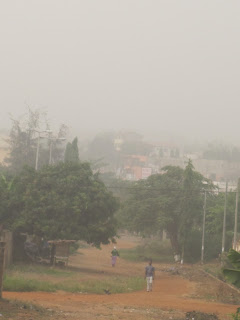 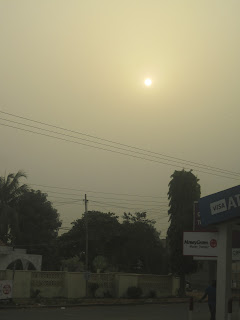 The White Stuff Keeps Falling!  Visibility is limited, flights are delayed or canceled, it is darker in the morning and generally all day long...is Ghana experiencing the same weather as the US?  No, but there are definitely similarities.  This is the worst Harmattan winds that I have seen and many Ghanaians report that this is worse than normal.  As you can see by the picture, the dust is so heavy in the air  - you can dust things in the morning and two hours later it is covered again with a fine white dust.  Imagine dust raining in your house - you leave footprints when you walk.  It's a dusting nightmare!  People are coughing as we breathe it in all day, eyes are burning with it.  The picture taken at the sun was at mid-day - you can easily look directly at the sun without it hurting your eyes because there is so much dust in the way.  The weather is still warm enough that you don't want to shut the windows but it makes me rethink the air conditioning debate of February 2010 that Bob wrote about... 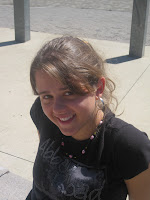 Hannah has been oh-so-busy applying to colleges and also scholarships.  She found out that she was accepted to the two colleges of her top choice - Calvin College and Eastern University.  When she learned that she was accepted to Calvin, I think people within a five mile radius could hear her scream of excitement.  Clearly she is favoring being in her home town, with friends, her aunt and uncle, her beloved church and pastor, and of course, lots of familiarity.  She continues to do well in school but does seem to be fighting a little bit of "senioritis".  She is currently in the Model United Nations, along with many highschool students from the West Africa region, and this year was assigned to represent the United States Security Council.  Should be a good learning experience again. 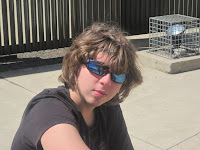 Noah turned 16 years old on Sunday, January 16!  It's so strange to think of him that age!  He spent the weekend with five other young men, playing Xbox, basketball, guitar, watching movies, and played a great board game called "Quelf" - this board game is lots of laughs and is great for a group.  They stayed up all night on Friday night will probably be paying for it for a few days but they had fun.  He is starting the second semester of his junior year - the year that is important for grades as that is what colleges look at.  They just received their first semester report cards last week and he continues to do well.

Managing Relationships with LOVE (Limits, Obligations, Values, and Education) - For the past ten days, we have had a visitor from Judson University in Illinois, Dr. Marsha Vaughn.  We met Marsha at the Partners Worldwide conference in October and she expressed interest in the boundaries class that we teach as part of our business curriculum.  She is also doing research on the impact of business on women and their families in developing countries, so a trip here would allow her to continue that research as well as offer a workshop that would go deeper into the boundaries issue.  The first few days were spent visiting women-owned businesses, with the focus of learning about the impact on the woman herself.  I learned a lot about Ghanaian marriages and the role of the extended family.  It was enlightening to visit businesses from this context.  We then had a three day workshop, on the above named topic, with leaders who both need boundaries for themselves as well as find themselves in positions where they need to counsel people.  This was then followed by two days of counseling appointments for these leaders, for them to experience being a counselee as well as to learn more directly from Marsha.  The time was powerful, productive, and eye-opening.  We thank God for Marsha and her willingness to spend some time here.  The pastors are now planning on how to follow this up and create more supports within their churches.

Posted by The Reeds in the Wind at 1:41 AM No comments: