On October 7 and 8, Partners Worldwide will be holding their International Conference, called Marketplace Revolution, at DeVos Place in Grand Rapids.  This conference will have international attendance from over 20 countries and I am happy to say that West Africa will be represented as well. 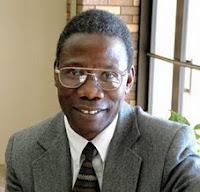 Dea Lieu (left), Director of ACLCP from Danane, Cote d'Ivoire, left already two weeks ago and is spending some time traveling in the US visiting various supporting churches and friends. 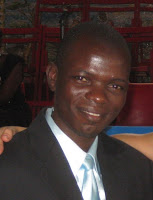 And Fanny Atta-Peters (below),  Director of Hopeline Institute in Ghana, will also join Allen and I on that flight.  We are still hoping that another staff person from Hopeline, Ebow Graham, will be able to come.  He has been waiting approval for his visa for 12 days now, still without a definitive "yes" or "no". 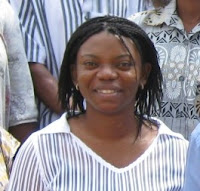 This will be a busy time, with many meetings before and after the conference, taking my West African friends around my home town after they have been such good hosts in their countries, and many other events.  If you are in Grand Rapids, please join us on Sunday evening at Madison Square Church where we will be showing the documentary, Pray the Devil Back to Hell and having a dialogue with Allen and other Liberians in Grand Rapids.

While I am in the US for about ten days, Hannah and Noah's teacher and his wife, Ryan and Melissa Von Hoyningen Huene (yes, that is one last name - no, it's not a combination of two names) will be staying at our house with Hannah and Noah.  This is their second year teaching in Ghana and I am very thankful that they are willing to stay with the kids while I travel. While I am gone, Hannah will be taking her last SAT and Noah will take the PSAT. 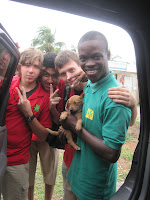 And then there were three.........
Back to three dogs.  Ah...suddenly three dogs (which felt like a lot before) seems like so few.  All seven puppies found homes, Hannah raised a little money for her senior trip, and we are not tripping over puppies when we walk outside, while trying to avoid little puddles and droppings.  Here is a picture of the first puppy who found a home, along with several of Noah's friends.  From left to right they are:  Noah, Ravindra, Armand, and Kojo.


A cultural event...
I was able to attend a play at the University of Ghana, entitled "Emancipated Captives".  It was very well done, in an outdoor theater [which was risky given that we are the end of the rainy season - and unfortunately during the last 20 minutes of the play it rained so we all huddled together while the players (who had a roof) finished their act.]  The play covered a good portion of Ghanaian history and was humorous as well.  I took a brief clip of some of the dancing for you to enjoy - this dancing was happening in the context of a lament over traditional dancing becoming a lost art as more Ghanaians begin turning to Latin American dances.

Posted by The Reeds in the Wind at 5:55 AM No comments: