Weather:  I know Bob was very good about sharing the weather with you weekly and I tend to forget.  So let me give you an update.  We are transitioning from the rainy season to the dry season.  This rainy season has lasted a little longer and we have seen more rain than we did last year, which has given us more comfortable weather.  Average weather has been in the mid-80s during the day and low 80's at night.  As we edge toward the dry season, the temperature will begin creeping into the 90's.  The forcast for today is 90 F with humidity at 89% and dewpoint at 73%.

This has been a busy and stressful time for the Reed family and as I write this, we are not bearing it up very well.  In addition to a crazy work schedule and traveling, there has also been a number of guests coming and going in our house.  While we love them individually, it takes a toll on the three of us and how we operate as a family unit,  especially as introverts.

Additionally, there have been other stresses as well.

October 20, 2010 would have been our 20th wedding anniversary.  I took a sick day and spent the day mostly in bed sleeping and hoping it would be over soon.  This was not how I had hoped to spend our 20th wedding anniversary.  In the evening we watched the wedding video together, which we hadn't watched for years and years, and Hannah and Noah got a big chuckle over how young we all looked and acted. 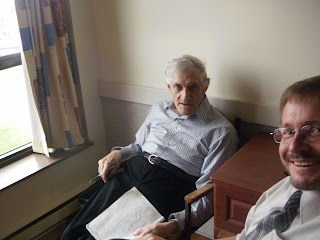 On Monday, October 25, my father was moved into a nursing home, which was a difficult decision for my mom and siblings.  As I may have shared before, he has Alzheimers and it had become increasing difficult for my mother to care for him.  We are so thankful to God that the transition seemed to go well and he has settled into his new home fairly quickly.  He celebrated his 82nd birthday yesterday (November 7) and all my siblings were able to gather with him to spend time together.  The picture is of my dad in his new room, along with my brother Henry. 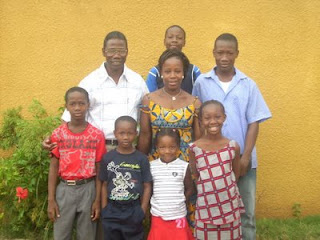 On Friday, October 29, I received word that Dea Lieu, our Affiliate Manager for Cote d'Ivoire had seen a doctor in the US and was informed that he has one week to six months before his kidneys shut down.  My heart feels so sick for Dea, Charlotte his wife, and their five children.  The North American team with whom he works (from Iowa) has been great in quickly rallying to support him, but the process of how acquiring a kidney transplant for someone with no insurance, who is not a citizen of the US, living in a country that cannot offer good follow-up care, is not an easy task and we ask for your prayers for Dea and this team as we work to find an answer.  This picture is of Dea and his family and their kids.  It's a few years old, and the kids are bigger, but you can still imagine the impact of this news on their family, especially as they are separated now by thousands of miles.  We are thankful that the voting in Cote d'Ivoire was peaceful so the family is safe at this time as they await the runoff elections at the end of this month.  Please keep them in your prayers.
Posted by The Reeds in the Wind at 1:30 AM No comments: