The Theology of Sleep

I'm reading a book called Redeeming the Routines by Robert Banks (another book given to me by my book-generous husband) and he talks about a Theology of Sleep. 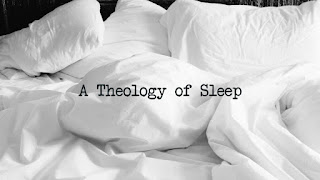 I love this!  We have been talking about this in DML - that the role of the church is to equip the saints for the work outside the church building.  Most of our time is in the workplace, and the second highest lump of time is spent sleeping.  One-third of our lives!  I have often joked that we need to have more sermons about sleeping!

But sleep is no joke.  Many of us brag about how little sleep we get or need.  Some of us talk about how we get up to pray every morning at 4 am.  And those of us who actually do need seven or eight hours of sleep per night (myself included) feel a little guilty.

We think that maybe we are sleeping too much.  Maybe we will be perceived as lazy?  Maybe we are not holy enough?  Can we really be honest and tell people that we get 7.5 hours of sleep per night?

But we also know that we were created to sleep.  Sleep is a critical biological function of every human being for so many different reasons.  Our bodies need the rest but our brain also needs the rest.  I often say that sleep is where the brain's housekeeping gets done.  The trash is taken out, the cobwebs are swept out, and so on.  If you aren't getting enough sleep, you probably feel a little cloudy, a little murky.  And it's because the housecleaning did not get done in the brain.  Below is a video by the author of Why We Sleep, Dr. Matthew Walker.  He tells us that sleep helps memories form; sleep helps to stabilize and support our mental and emotional health.  Without quality sleep, our reactions become hyperactive and irrational.    He says, "We cannot find a single psychiatric disorder where sleep is normal." Plus there is a strong correlation between sleep disruption and cancer due to the lack of "killer cells" developed.

The Bible does have something to say about what we do with one-third of our life in this regard, but we don't hear messages about this.  I've actually heard of pastors who have told their members to not sleep more than four hours a night - to spend the rest in prayer, otherwise it's a "waste of time." 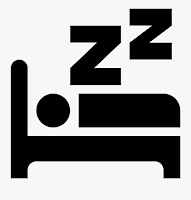 If God doesn’t build the house,    the builders only build shacks.If God doesn’t guard the city,    the night watchman might as well nap.It’s useless to rise early and go to bed late,    and work your worried fingers to the bone.Don’t you know he enjoys    giving rest to those he loves?

Rest is a gift.  It is given by a God who never sleeps.  It is a daily reminder that we are not God.  God handles the world very well on His own while we sleep.  He doesn't NEED us but He desires us to join Him in what He is doing.

But we do it best when we are rested.

So sleep.  Make sure you get good sleep.  Receive it as a blessing from God, so that you can be a blessing to others.

Blessed to be a blessing.

Here is the video on "Why We Sleep" if you are interested: