This has been a very busy and fast-moving week in Kenya.  I arrived in Kitale late on Tuesday evening and early Wednesday morning we left for Kakamega to meet the Bishop of the Anglican Church of Kenya.  It was a delight to meet with him and he seemed equally delighted in the work of Discipling Marketplace Ministers.  He quickly organized for us to speak to all of the clergy in August from his diocese, and is going to work with us on organizing the first training of the ACK in Kakamega.  [This had been our control group in the research study but we promised them that when the study is over, we would offer them the same services as those in the treatment groups.] 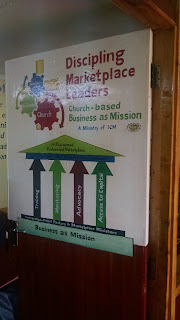 We then had a meeting with Rafiki (which means "friend" in Swahili) bank where we are exploring having our loans flow through.  It was a good meeting and Caroline's history in the banking industry came in very handy!

The DML office also did some "growing up" in the last week.  It received a full paint job with logo on the door and mission statement painted on the walls.  We also bought desks and office chairs!  It feels like we are moving from the baby to toddler stage!  [I had deja vu of doing that in Restorers for the first time...in Liberia...in Ghana...and now here.] 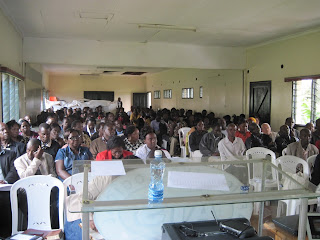 But the focus of the week was on the inspirational event that we planned for Saturday for all Marketplace Ministers, with BAM father and guru, Rev. Dennis Tongoi from Nairobi.  We had hoped that we would get 100 people out for the event but we were surprised to have 177 people show up!  It was a great time (even though we ran out of food and handouts!).  Rev. Tongoi is a great speaker and everyone loved him.  I first met Dennis Tongoi in 2005 at a conference in Nairobi and he inspired me then.  I view him as my father in Business as Mission.  He is now the Executive Director of CMS (Church Mission Society) Africa and they have an active Business as Mission program as well.  He brought his wife as long as two of his staff members and we found great opportunities for collaboration.  God is at work! 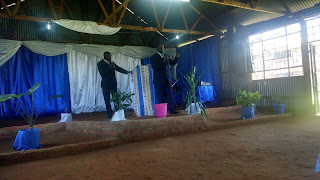 On Sunday morning, we had a chance to worship at Pastor Moffat Weru's church.  If you remember, he was the pastor who has been very active with us, and his motorcycle shop was looted last December.  We did some advocacy work with the insurance agency and they agreed to pay him for his losses.  I found out that when he informed me that he had received the check, I had taken it to mean that he had received the check from the insurance agency - but he was referring to the check from a few of you who gave gifts to help him cover his losses.  I learned today that the insurance agency changed managers and reversed the decision.  He has spent 90,000 KSH (about $900) pursuing this but has not gotten anywhere.  He continues to work hard in his church and he preached a powerful message on the end of poverty and the holy calling of business. 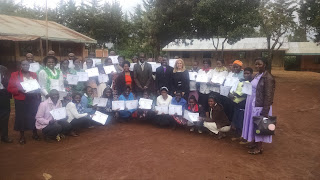 The afternoon found us at the commissioning service of Marketplace Ministers in Chebarus with the Christian Reformed Church of East Africa.  There were 41 graduates and a great amount of energy in that place!  We drove in to them singing as seen on the video below.

There are currently seven (!!!) DML classes going on simultaneously in Kitale, Eldoret, Kisumu, and Kiminini, with more pending to start in July.  This is where we begin to see exponential growth and it is exciting!

Tomorrow morning I have to speak at an area company on Business as Mission, then we will have our first Advisory Committee Meeting for DML Kenya.  Shortly after that, I leave for Nairobi, flying out to Ghana on Tuesday.

It has been a busy week but so productive and affirming of God's orchestration of events and people.  Thank you for your prayers!  Enjoy this joyful song!