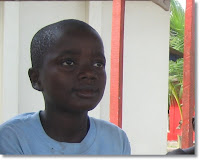 .
.
.
There are some blog posts that stay in my mind for a long time before I put it out there. There are a collection of themes rattling around in my head at any given moment, waiting for the time when it feels right to bring one of them out to you. This one has been in there for maybe two years.
Today, I’m musing about Trokon Morris. For some of you, especially those who followed us on the blog The Reeds in Liberia, the name is very familiar. A privileged few of you even met him. Trokon, now 14, lives in a 12’x18’two-room reed matt and zinc covered shack down the road from where we lived. Like his friends, and most children in Liberia, he is extremely poor, without access to health care, adequate food, shelter, reliable water, or sanitation facilities. He lives, not with his birth mother, because she says she is unable to afford to take care of him, but with another family. How his life would be any more impoverished with her instead of this family I cannot imagine, and I think he knows he’s been dumped.
.
His de facto mom, Sara, is on her own and cares for Trokon and three other birth children—Eastman, Jackson and Hannah. Sara suffers from severe vitiligo, a skin pigmentation disorder, which brings her shame and makes her something of an outcast. She survives by selling goods and produce from a small table in the Foster Town Market.
Trokon, along with Eastman, were the boys I came to trust the most in Liberia. They had more free access to us and our home than anyone we knew. They were with us every day, all day, and they became part of our family. I think of them like family, and I miss them a lot. They actively disliked each other, taunted each other and at times were viciously cruel , but they were almost always together-- perhaps they were competing for our attention. Eastman was-is- the simple steady one. Not particularly bright, he was the embodiment of loyalty and faithfulness. He was always there, usually in a good mood, and loved to pick at me. He was never happier than when I had him in a head-lock. Trokon on the other hand, was- is- charismatic, moody, intelligent, fickle, and a natural leader. When he was in a bad place emotionally, he was sullen, humorless, and everybody knew it. When his mood switched, as it often did quickly, he was mischievous, bright and eager to play. Far more independent than Eastman, he did not care so much about pleasing me—which pleased me even more.
I kidded both boys a lot, and they usually gave as good as they got, but in one area, Trokon was defenseless and by the time we left Liberia, just a certain look or a word could send him off screaming. See, I thought he was the most beautiful boy I ever met. His face was perfectly proportioned, and whenever I really wanted to get to him, I would attempt to compliment him on his perfect face. His pals would sometimes say he looked like a girl, so maybe when I said his face was perfect, he thought I was mocking him. But I wasn’t. Nevertheless, I knew just telling the truth would end any competition or playful debate. For me, his beauty added something to the mystery of the boy. I think it adds to the pathos of his story, and mine, and ours. His story is my story is our story. It makes it much more impossible to let him go. So I won’t.
I don’t know when I will see Trokon or Eastman again. But I know I will as soon as I get an opportunity. Renita and I have made some commitments to them regarding their education, and we maintain regular phone contact, so we are in for the duration. As I said, I’ve been thinking about this post for quite a while, and finally it’s a good time to show you his perfect face. 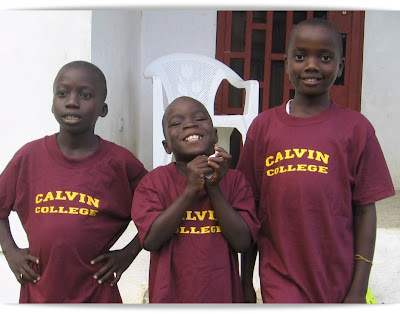 The troika: Eastman (actually Ishmael), Enoch and Trokon. happy in tee-shirts provided by the Calvin Team on their first visit-- summer 2006 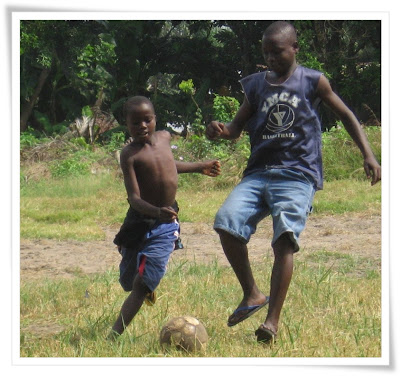 A fierce competitor, Trokon takes on Romeo in football. 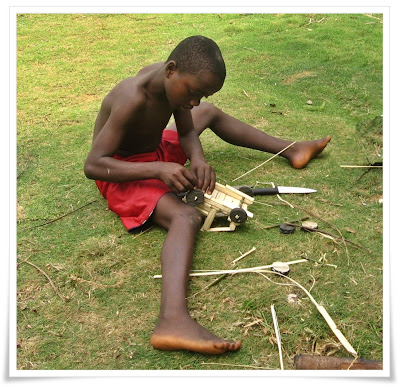 He does not like inactivity. He always brightens when he had things to do. Here making a toy truck entirely out of bamboo-- tires courtesy of discarded flip-flops. 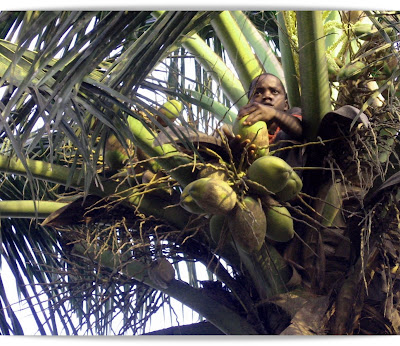 He was forever hassling me to harvest coconuts and palm nuts from our trees. He trimmed the husks and sold them from a wheelbarrow for about 20 cents a piece. 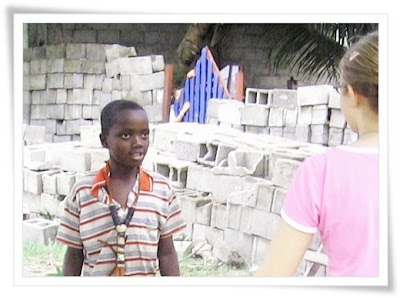 Squaring off with Hannah. "Oh yea? C'mon then!" 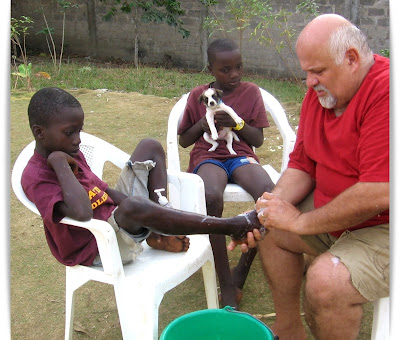 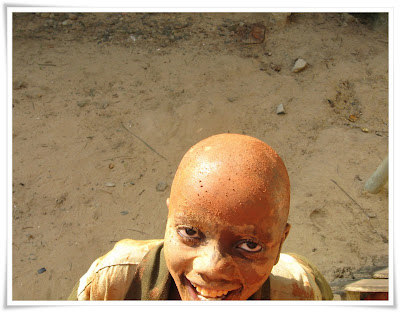 There were some wacky moments-- I'm looking down on him at our small gate; he's covered in sticky red mud, trying to get in to give me a sloppy hug. 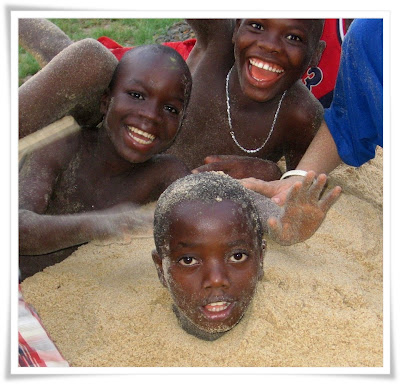 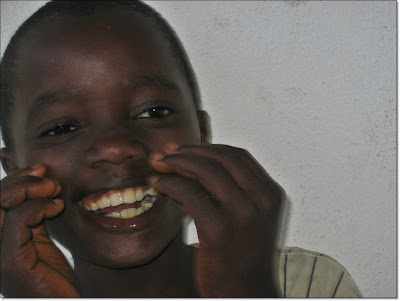 A very early shot. The secret to capturing this reaction? Get the camera ready, train it on the kid, and then suddenly and loudly pass gass. 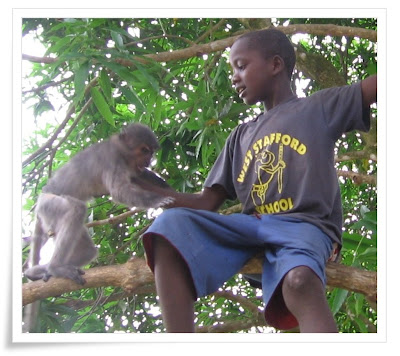 Trokon and the Monk. He was rightly nervous around her, but he enjoyed provoking the viscious lil' whirlwind when at a safe distance. 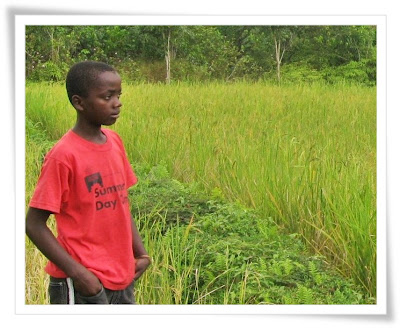 A moody moment in the rice fields of Kakata. 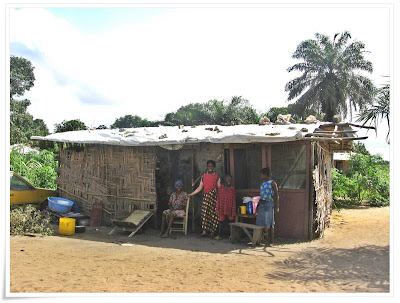 His home. He calls them family but he knows his real mother is somewhere else, unable or willing to care for him. This abandonment was always a source of pain and anger for him. 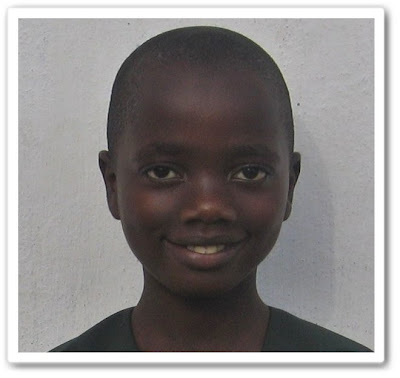 See what I mean? Perfect.
Posted by The Reeds in the Wind at 11:39 PM No comments: