[I leave for Egypt tomorrow, Tuesday, November 11.  A number of my loved ones are concerned because of the recent plane crash in Egypt, possibly linked to terrorism, but I have often felt that the best time to travel to a troubled region is just after such an incident, as security tends to go way up.  Feel free to pray as you feel led, but also pray for the Russian families who lost loved ones, as well as tourism industry in Egypt which has gone down 95% since the revolutions started in 2011.  One in nine Egyptians work in the tourism industry so many families are suffering and this recent crash will not help matters!]

This last week, I heard the phrase "the global poverty industry."  That phrase immediately caught my attention and made me think.  An industry designed for the purpose of the production of poverty.  Hmmm.  Could people really be so crass as to have the objective and purpose of perpetuating poverty?

What do I mean? 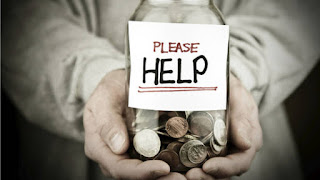 Let me give you an example relating to orphanages and child sponsorship programs, which are pet peeves of mine.  Many of you may support these (and of course I know that adoption is necessary in certain contexts), so I'm not meaning to offend, but having spent so much time in Africa, I have seen how much money gets poured into orphanages and child sponsorship programs in ways that are not healthy and actually seem to perpetuate a "global poverty industry."

This past week, I heard a statistic from the director of a documentary called Poverty Inc., that 80% of orphans in Haiti have one living parent.  I also heard that 22 out of 26 children in orphanages have one living parent.  I saw proof of this myself in Liberia, Ghana, and Kenya.  An American Christian couple told the story of going to adopt a child, and were asked by the director of the orphanage if they wanted to meet the mother.  They were surprised to learn that the child had a mother, but agreed to meet her.  They learned that this mother visits her child every two weeks and tries to bring him something in each visit.  When they asked her why she wanted to give up her son for adoption, she said, "I don't want to.  But I can't afford to keep him."  This couple was about to spend $20,000 on an adoption. They had reflected on James 1:27 which says, "Religion that God our Father accepts as pure and faultless is this: to look after orphans and widows in their distress and to keep oneself from being polluted by the world."  They wondered whether a lot of the care for the orphans was creating economic incentives for parents to give up children - to make their children orphans - rather than helping parents keep their children. 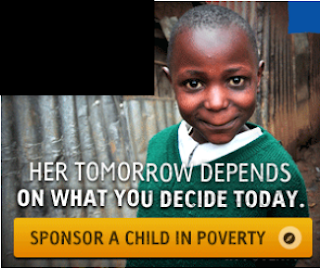 The advertisement that I have posted here from a large non-profit child sponsorship program makes me very uncomfortable.  To say, "Her tomorrow depends on what you decide today," implies that her future is not in her own hands but rather in a stranger's hands - who might not know or understand her context, culture, or condition.  It is giving way too much responsibility for a small gift of $38/month.

And of course for me, in the work that I do with Discipling Marketplace Leaders, the answer seems so obvious.  What if we focused on ministries that created jobs that allowed people to keep their children?  If we help people get jobs...if we help people to do business better...to be job creators...poverty can be alleviated for the long term, rather than giving to something that potentially perpetuates poverty.  And if we disciple people to do business to the glory of God, not only can poverty be alleviated, but the church can be built,  and the will of God can be done "on earth as it is in heaven."

People in the North America have very good and compassionate hearts toward the poor, and it doesn't take long to look around and see very creative ways that people find to raise money to help the poor.  We are problem solvers!  But we need to apply those skills and that passion to solve problems for the long-term and not the short term only.  We need to be sure that our efforts are not going toward supporting a poverty industry, but rather for long-term poverty alleviation.

But I also know that it feels good to help one child - to receive a picture and a name of an orphan being sponsored. Helping a business develop does not pull the heart strings as much....or as Bob used to say, "is not as sexy" or attractive to people.  But James 1:27 says to help orphans in their distress - surely it is more stressful to lose the family home, parents, and culture, than staying there; surely it is in the best interest of a child to stay with their parents, and for their parents to financially provide for their own children rather than relying on the kindness of strangers.  And surely, the world will determine ways to "solve" these problems that help to keep those non-profits in business, with employees that are very well paid.  FYI - did you know that the majority of foreign aid stays in the donor countries and goes toward debt relief or the activities of poverty alleviation rather than to the countries themselves?  In Denmark, it is 70%!  I also read of a very large non-profit where only 2.5% of the money raised actually goes to the intended beneficiary!  We need to be informed through places like Charity Navigator, or actually looking at the IRS 990s that charities are required to put on their websites to see what the executives are being paid and make informed decisions about how our compassion is directed.

As you consider your year end gifts, I would encourage you to put your hard earned dollars to work in a way that will make a long term difference in this world, and not contribute to the "poverty industry."  My friend, Jeff Bloem, sent me a link to this video, "How to Feel Good about Poverty."  It's only a couple of minutes long but I encourage you to watch it.  It doesn't provide answers, but rather questions.  And as I wrote last week, we can find those answers within ourselves, if we ask the right questions.