Hi folks!  This week should have been a report from Côte d'Ivoire but unfortunately I was not able to travel there due to border difficulties.  My time was not at all idle in Liberia, as there is always much work to be done!

We spent much of the week working on LEAD's capital project.  The fundraising for this project started about two years ago, and we are 4/5ths of the way there, so we hoped to begin building at the beginning of this dry season (November).  However, this week, we began seriously considering switching strategies from building to buying.  There are two buildings that we saw that have so much potential for both adequate office space as well as income generation to help make LEAD more sustainable.  To say that it is easier to buy instead of build (especially in Liberia), would be a HUGE understatement!!!  So we are very hopeful that we will get approval from the LEAD board, from LEAD GR, and then be able to negotiate on the property to make it a good deal for LEAD.  Please pray with us that someone else will not buy the building in the meantime! 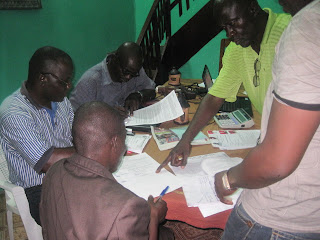 LEAD has also started a new type of loan product, still in the PEI category if you are familiar with LEAD's programs, but designed for institutions instead of small groups.  The institutions are Savings and Loan Clubs or credit union types, have to be registered with the government and have been in existence for two or more years.   They are able to receive much larger loans as their membership is large.  The first loan went out for 1.5 million Liberian dollars (about $21,000 US) for 56 members, and the picture on the side is of the second such loan going for one million Liberian dollars (about $14,000 US) for 200 members.

We also went around Monrovia to show Dana some of LEAD's business, and specifically asked to see businesses who have been members of LEAD for many years, having their third or fourth loan.  We went to an area called Duala where there were four such businesses in close proximity.  As we walked from one to the other, a man named Joseph rushed across the street to greet us.  He told us that he had gone through LEAD's training in 2008 and had benefited so much from the training that his business has more than doubled, even though he had not taken a loan!  He was so excited to see us and to show us the progress that he had made in his video club business since then.  He quoted to us a number of things that stood out to him from the LEAD training that he still implements today, including the fact that training alone can increase the profit of a business by 25% without a loan!  It was encouraging to hear his story and know that our training makes real impact!

Even though the week was very busy with work, I also had a great time catching up with people.  Allen's son, Allen (or Dada), is getting so big and will be four years old next month.  He had a good time showing off how he can write his ABCs and count!  I also had the delight of meeting Allen's new son, Andrew, who is now four months old and very healthy!  He laughed and laughed and was full of joy!

We also had the honor and privilege to attend the wedding of Moses Davies (the Finance Officer of LEAD) on Saturday, October 20.  There are some pictures below of their wedding.  It was a very participatory, exuberant wedding with lots of dancing, cheering, and celebration!  October 20 is also our wedding anniversary (would have been 22 years), which made attending a wedding very bittersweet.  I had a hard time getting through that day.  I was very thankful to have Dana here with a shoulder to cry on and to remind me to take deep breaths to get through the service, as well as my very thoughtful daughter calling and texting me.

Below are also some beautiful pictures of the sunset over the water, which always reminds me of God's presence, creativity and beauty, available to us no matter where we go in the world!