Where Ivoirians and Liberians meet

Not too long ago, I was sent this news link from VOA (Voice of America) by one of our North American partners working with Cote d'Ivoire.  It was such a joy to receive it because so often the news we hear out of Africa is negative - famine, corruption, wars.  This story is about giving, loving our neighbors, and living in community. 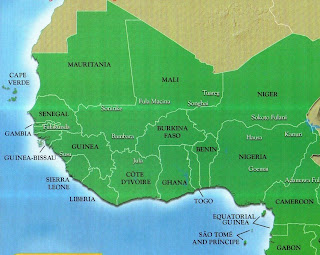 As you know, Côte d'Ivoire suffered a civil crisis this past year, which hopefully has brought an end the ongoing split in the country since 2002.  From January - April of this year, approximately 150,000 refugees left Côte d'Ivoire and fled into neighboring Liberia.  The common border that is shared between these two countries is a political one - people on each side view themselves as from the same tribe, with a common tribal language.  It is also an area of Liberia that is not well developed or easily accessible by road, making it difficult for aid agencies to come in.  However, this video, which you can see below, shows how the villages there stepped in to welcome the refugees into their small homes, sharing their food, their farm lands, everything.  And why did they do this?  Because it wasn't too long ago that Liberians were fleeing from their civil crisis into Côte d'Ivoire, where they received similar treatment from the villagers there.  And we are not talking about being good hosts for a day, a week, a month...but in some cases fourteen years!

I know that cultural differences enter into this.  Here is an example of this cultural difference: if you are a man and you go to someone's house to visit by yourself, it may be that the host would say, "I have made arrangements for my two sons to sleep in your bed with you, so that you will not feel lonely."  Most Americans would say, "Thanks but no thanks."  But it does definitely make me examine how "turfy" I am with my own living space and stuff.  To have a one-room home with four children, and then to open it up to an additional four persons?  I don't think I will be able to make that change in this lifetime...but it does make me think.

Here is the video from VOA - about four minutes long.