My trip to Cameroon was canceled.  We have postponed the DML trainings in Cameroon until February.  Both major cities, Yaounde and Douala, are on lock-down by the government until the announcement of the winner of the election, expected on Monday morning.  Riot police have taken over the streets and gatherings have been canceled.  Citizens are currently blocked from using the internet.  It is expected that the current president, 85-year-old Paul Biya, will be announced as the winner again, starting his seventh term as president.  There have been many accusations of widespread fraud and voter intimidation, but all legal attempts to have the election rerun failed.  Prominent politicians are under house arrest and many journalists have been arrested as well.  Because of this, we don't expect there to be a lot of news coming out of Cameroon, so please pray for our brothers and sisters there!  Please continue to pray for peace in Cameroon, as well as justice and equality for all citizens of this country, both English-speaking and French-speaking.

I leave for Ghana this Thursday, where we have two very busy weeks scheduled.  I land on Friday at 8 am and then leave immediately for a three-hour talk on "Doing Our Business God's Way."  Hopefully I will be able to stay awake!  We then will have a two-day workshop the following Monday and Tuesday for pastors and church leaders, followed by a Training of Trainers for the rest of the week.  The exciting thing will then be Sunday, November 4, when our DML teams from Ethiopia, Uganda, Kenya, Tanzania, Cameroon, and Nigeria will all arrive in Ghana, and we will spend five days together learning, sharing, and growing in how to do this ministry to the glory of God.  Following that time, I will make my way to Nigeria and will be there for about ten days. 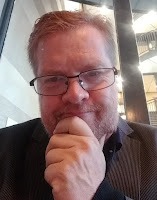 It is time for a brief update from home:

The big news is that Michael has left his job at Eerdmans Publishing Company after twenty-three years.  He served as the Sales Director for a number of years, and then as the Senior Acquisitions Editor for a number of years.  He has taken a job with a different publishing company called "Wipf and Stock" where he will start Monday in a similar position as Acquisitions Editor (https://wipfandstock.com).  Wipf and Stock is located in Oregon, but Michael will be able to work from our home in Michigan.  This will be a big change for him, as well as for us as we adjust to both of us working from home - at least when I'm here. He's excited about this change, and the opportunity to work with this new company which is growing and involved in some similar yet some different lines of books.

During the farewell lunch for Michael on Friday, his boss described Michael as someone who has exemplified being flexible and forgiving in their office.  They also remarked on what an incredibly hard worker he is, and how he is like the energizer bunny, which keeps going and going.  I would definitely agree with this assessment of Michael.  He is one of the hardest workers I know.  He bends over backward to help people, and he has a great ability to not hold grudges and to forgive those who have wronged him. He is faithful, flexible, and forgiving!

We are thankful for this new phase in Michael's life and the opportunities ahead.  God is good!
Posted by The Reeds in the Wind at 6:54 AM No comments: