The Role of the Church in the Faith at Work Movement

While I was grounded in Grand Rapids for a number of weeks due to illness, I tried to put my time to good use by continuing to coordinate the work of Discipling Marketplace Leaders in different countries, and also spend time reading and reflecting.  Two books that I have been working through are God At Work:  The History and Promise of the Faith at Work Movement by David W. Miller, and Flourishing: Why We Need Religion in a Globalized World by Miroslav Volf.   These two books have made me think and rethink the work of Discipling Marketplace Leaders.

When I started feeling the call to move the work of business development into the Church, I heard a number of voices that it "couldn't" be done and also that it "shouldn't" be done.  The reasons for those words seemed to me to be unfounded and without depth, casting aside the Church as a broken institution that has lost its way, rather than the people of God equipped by the Holy Spirit to be change agents in the world.

Miroslav Volf's book looks at the often competing visions of world religions and market-drive globalization processes and how they impact lives worldwide.  He looks at the historical relationship as well as what the relationship should be.  He concludes that world religions, despite their malfunctions "remain one of our most potent sources of moral motivation and contain within them profoundly evocative accounts of human flourishing.  Above all by keeping alive the truth that human beings do not live by bread alone, religions can foster hope and global solidarity, bridge the yawning gap between the rich and the poor, and help protect our endangered planet.  Globalization in turn can nudge world religions to loosen ties to particular states, which tend to rope religions into legitimizing violence, and help them rediscover their authentic universality." 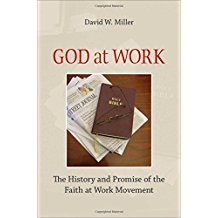 David Miller's book tells the story of how the faith at work movement has moved through the church for the last 150 years, giving a rich history and context for what has worked, what has not, and some of the reasons for it.  He describes the Faith At Work movement in terms of three distinct waves.  Much of what is in the book is what we have experienced:  there is a lack of theological understanding and teaching from seminaries; clergy are focused on criticizing the problems in the marketplace without appreciating the complexities or the theological possibilities in the marketplace; churches are too focused on an internal focus at the expense of the external focus. While some denominations (Reformed and PCUSA) have a theological tradition of linking Christian vocation and work, most do not move from theory to praxis, or from the structured to the personal.  Another of our consistent findings is the lack of awareness or "unconscious" of the distance between the Sunday/Monday gap, and how the church actually contributes to it.

There have been times when a pastor will tell me how well they are connected to their business people and discipling them.  This book has given me two great question to ask to find out more from these churches:  "As an operational focus, in comparison to other departments, how much staffing and what amount of budget resources does the Faith At Work ministry receive?  Secondly, how frequently are Faith at Work issues addressed theologically, and what is the content of this expression as seen by denominational policy statements and discussion papers?"

For me, it finally gave some depth to critics of the work of DML and confirmed some of the struggles that we are seeing with some countries and some denominations relating to DML. It has been good for me to be reminded that this is part of an on-going battle that will not be completed until Christ returns.  It also reminds me that, of course, this is one miniscule battle in the midst of many battles going on.  But I know with confidence and joy that this is the battle I have been called to, surrounded by a great cloud of witnesses who have gone before.

Next week I leave for Tanzania, where we will be joining many people for the Theological Education in Africa conference.  Dr. Walker and I will be teaching about Discipling Marketplace Leaders and ask for your prayers for those who will be attending to be energized, encouraged, and equipped to continue to work towards building the Church.
Posted by The Reeds in the Wind at 8:09 AM No comments: