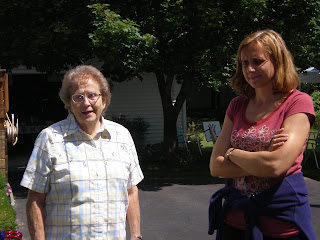 As I travelled home from Cameroon on Sunday and Monday, I received a text message that Bob's mom, my mother-in-law of 29 years, was not expected to live long.  She had been given two weeks to live before I left for West Africa, and my prayer had been that she would last until I got home.  I got home on Monday night and on Tuesday morning drove through the snow/ice of a winter storm to Cadillac to see her.  I had the priviledge to sit by her side until she passed on Wednesday at noon.  It was an honor to sit with her, sing to her, read to her, pray for her, massage her feet, and wet her lips.  She was unconscious the whole time but I was told she could still hear.  In some ways it felt like a divine appointment that I was able to get back in time to have that precious time with her.

As the family has decided to just have a visitation service for her, I wanted to share my thoughts about this woman and decided that since this blog has been like a journal for me, I would share it here.  Maybe someday my grandchildren will want to know about their great-grandmother. 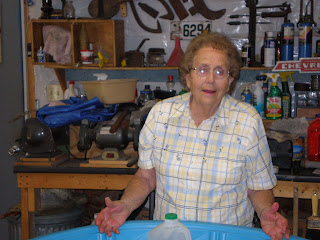 I met Lucille in 1990, the year Bob and I started dating and married.  At that time, Lucille was married to her third husband, Keith.  Her first husband, Bob's dad, died in a house fire when Bob was three.  They had four children together.  Her second husband was Bob's uncle and they had two children together.  Her marriage to Keith lasted more than 25 years.

Lucille was a bit of an enigma to me.  She was a very giving person - always making pies and cookies for people, helping to rake their yards, mow their lawns, shovel their snow.  She loved garage sales and was always picking things up for her kids and grandkids, or for neighbors and friends.  It was Bob's belief that because she had received so much after the house fire and her husband's death, that she wanted to give back.   I think it was just also a part of who she was and it helped define her.  But despite her love to help, she was not your stereotypical loving, giving person - not one for much flowery emotion or sentimental conversation.  She was a very no-nonsense, direct woman (if you knew Bob, that's where he probably got it from), and absolutely disliked talking about deep issues or emotions (and if you knew Bob, you knew that drove him nuts).  Her favorite response when asked about her thoughts or feelings on things was "I don't care." 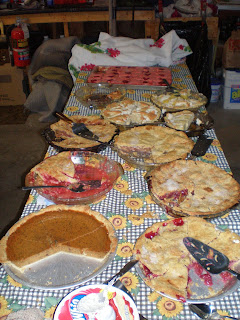 Often, if we pushed subjects to deep issues, she would quickly begin crying.  Bob believed that was because she kept burying emotions without processing, and so it didn't take much prodding to get to the underlying emotions that were there.  I was privileged to do an interview with her when I was working on my MSW and I learned things about her that Bob had no idea about.  For a few minutes, I was able to lift that curtain to see the complex woman underneath.

Her faith was also a subject of debate between Bob and I.  She certainly was not a fan of "institutional religion" but Bob thought that she might have a private faith.  She acknowledged a belief in God but didn't go much further from what we could see.  Again, as she wouldn't entertain discussions of a deeper nature, it was difficult to have a good understanding of where she stood.

When Bob died, I wanted to do for his mom and stepdad what he would do if he was still alive.  And, even though I was in Africa much of the time, I tried my best to help out and visit as much as I could.  When I spoke to her on Tuesday, I shared what I thought Bob would say if he was there.  As I did, a tear came out of her eye.  I would love to think that she has now met up with Bob in heaven and that they are doing some catching up together.

Hannah and Noah lost their grandmother on Wednesday.  I hope they haven't lost their connection with their dad's side of the family.  Please keep them in your prayers as they process this loss in and of itself, along with the possible complications. 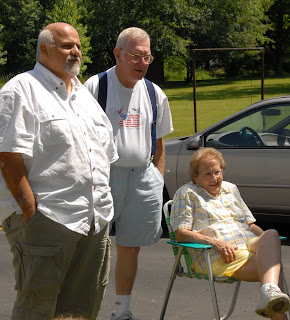 Keith, Lucille, and Bob - maybe all three in heaven, catching up together. 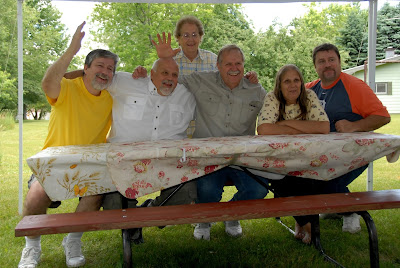 Lucille with five of her six children (2005).  Her daughter Brenda had passed away the year before (2004), and Bob died five years later (2010).  She is survived by four children, ten grandchildren, and four great-grandchildren.
Posted by The Reeds in the Wind at 7:13 AM No comments: