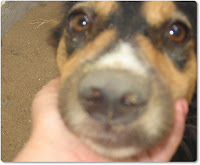 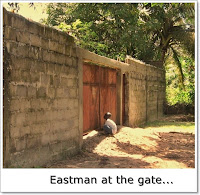 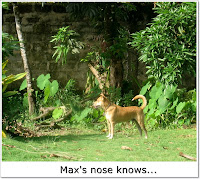 allas Willard. The book talked about learning to recognize the voice of God in our daily lives, and as I reflected on this, I remembered our dogs and how they not only learned my voice, but learned my scent. If two tick-bitten mutts in Liberia could discover the scent of a Canadian in seconds, how much more should I be able to pick up the presence, the voice, the scent of my Lord and Savior, in whose image I am created? So, how did these dogs do this? Did they work some formula? Set out to study my scent? Practice? No, the obvious reason is that they were around me every day. They learned my scent.
I want to learn more than the voice of Jesus; I want to be close enough to pick up His scent.
In the quiet of my retreat, I smiled at the lessons Nikki and Max had for me. I also reflected on the pure joy that our dogs expressed whenever we returned home. Anyone who has owned a dog knows this. It didn’t matter whether we had been gone all day and they had been tied up or whether we had been gone for five minutes. They were always excited to meet and greet us, almost knocking us over with their affection. Henry Scougal, in 1677 wrote in The Life of God in the Soul of Man, that “the worth and excellency of a soul is to be measured by the object of its love.” If the object of my love is Jesus, how do I greet Him? To be honest, it’s often with a long and tired face, hung up on the burdens of the world, the heaviness of the yoke I have taken on. I want that to change. I want to recognize His scent before He gets to the gate, and knock Him over with delight the moment I can get to Him.
In short, I want to be more like my dog.
Posted by The Reeds in the Wind at 4:00 PM 1 comment: