Weather:  The Harmattan winds have moved into Accra.  These winds are dry and dusty and as they pass over the Sahara, they pick up fine dust particles.  This dust limits visibility and blocks the sun,  while depositing a fine layer of dust on everything.  Noah reports that his lips are cracking and he needs a mask to keep the dust out of his lungs:-).  These winds have lowered the humidity from about 80% to 45%, and temperatures remain in the low 90s.
Ghana's neighbor to the west, Cote d'Ivoire, has been very much in the news in recent months.  Because of our work in Danane, on the western side, close to Liberia, I have been following this news very closely.  I thought I would highlight the current situation this week and ask for your prayers.

Brief History - Cote d'Ivoire became independent in 1960 and was lead by Felix Houphouet-Boigny from 1960 until his death in 1993.  During that time, Cote d'Ivoire became known for its religious and ethnic harmony, as well as a strong economy.  Since his death, the country of 20 million has seen several struggles for power as the country faced a democratic process for the first time, leading up to a civil war in 2002, primarily between the mostly Muslim north and the mostly Christian south, although the dispute was not over religion.  Much of the fighting had to do with voting rights.  Because of the economic success of Cote d'Ivoire, the country attracted a lot of foreigners, and by 1998, 26% of the population was made up of Africans who were not from Cote d'Ivoire.  56% of the 26% were from Burkina Faso, their poorer neighbor to the north.  The catalyst for the war happened in 2000, when the government declared that the parents of a presidential candidate must both be Ivorian born.  This excluded the northern candidate, Alassane Ouattara.  The fighting came to an end in 2004 however the country remained split between the rebel held north and the government held south.  Things remained tense until a peace agreement was signed in 2007.  Since then the country has waited for elections, which were delayed six times, mostly over the exclusion of names on the voting lists.
Current situation:  On October 31, 2010, an election finally took place, resulting in the need for a run off election on November 28,2010 between the incumbent president, Laurent Gbagbo, who has been in power since 2000, and Alassane Ouattara.  The Independent Electoral Commission declared Ouattara the winner, with 54.1% of the vote, while Gbagbo received 45.9%.  This was then overturned by the Constitutional Council, the highest court in the land run by the president's allies, who claimed "massive vote rigging" in four regions of the north, and declared Gbagbo the winner.  Both candidates were sworn in as president and have been in a stand-off ever since.  Most nations around the world have declared their backing for Ouattara and have requested, urged, and demanded that Gbagbo step down.  But so far, that has not happened.  Gbagbo has the national army.  Ouattara has the rebel army, the French contingency and the UN mission behind him.
Laurent Gbagbo (left)* 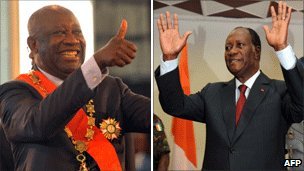 
So far, at least 22,000 refugees have fled to Liberia - mostly women and children - of differing political views - some who support Gbagbo, some who support Ouattara, but both who fear civil war and retribution for their vote.  Various foreigners have been expelled from the country, prices have risen, and there have been reports of some violence and killing.
There is only one country who has declared that they would not take sides and would support either government.  The country?  Ghana.  President John Atta-Mills declared this on Friday, stating that there are one million Ghanaians living in Cote d'Ivoire who would be victims in a military intervention.  Ghana would normally be one of three countries (the others being Nigeria and Senegal) who would be expected to take a leading role in a military intervention from ECOWA, which is the union of West Africa States.

In terms of reference, Liberia is slightly larger Tennessee, Cote d'Ivoire is slightly larger than New Mexico, and Ghana is slightly smaller than Oregon.   So if you happen to live in the North America, it would be like a neighboring state or province beginning a civil war.
Please keep this on-going tense situation, affecting millions of people, in your prayers.  Pray for wisdom and discernment for the key leaders, a resolution that doesn't include fighting, and provision for those who suffer in the midst.

Posted by The Reeds in the Wind at 1:45 AM No comments: