I Have Been to the Mountaintop...

...and have seen the glory of God!

Okay, let me back up a bit.  I arrived in Nairobi, Kenya on Monday night, and spent the next two days having meetings with various potential partners, as well as meeting with the ICM Kenya staff.  The concept of what I am going to be doing seems to resonate with business people, pastors, and non-profits alike, which is affirming!  Those meetings were promising and productive.  The traffic in Nairobi?  Not so much.  I'm so glad to not be based in a capital city for the first time in many years!

On Thursday afternoon, I flew to Kitale and arrived at the Africa Theological Seminary (ATS) in the afternoon.   Below is a picture of the seminary from Google Earth.  I have highlighted the house that I am staying in, as well as the classroom where I will be teaching.  I have a room and a bathroom in the house highlighted; the house has two additional bedrooms which are rented out to other visitors. 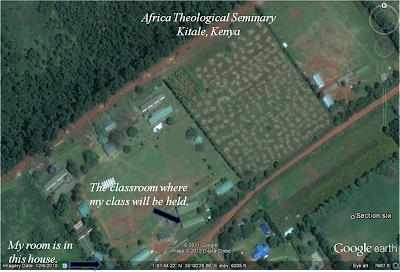 In the evening, I met my housemates - a married couple working with another NGO that shares some space on the campus, called Water Missions International.  She is from Indiana originally, and he is from Switzerland.  They have left the corporate field to take a year off and do volunteer work.  They are very high energy people who have seen more in their year in Africa than I have in seven!  They invited me to join them for a weekend trip to Mt. Elgon National Park.  We would leave Saturday morning, hike up Mt. Elgon (about 14,000 ft), spend the night in the park, and then see the salt caves in the morning.  Knowing that this couple would only be here for about two more weeks, I had to say yes!

On Friday, I had a chance to meet with the ATS staff and was able to sit in on a class in the afternoon.  This was a class for the BA in Counseling, and several students from that class will be in my class next week.  They were giving presentations, so I had a chance to get to know them a bit, which was great!

On Saturday morning, we left for Mt. Elgon with a group of nine:  four Kenyans, two Germans, one Swiss, and two Americans.

I thought I'd tell you the end of the story first - I made it to the top!  But it was not a pretty story.  We started climbing and after the first 100 meters of a straight vertical climb, I almost quit.  I view myself as someone who is in pretty good shape so I couldn't figure out what was going on!  The others reminded me that I had just arrived in Kitale and my lungs hadn't yet adjusted to the higher altitude.  When we started this climb, we were at the base - at around 11,000 ft.  When we started climbing, I couldn't catch my breath and my legs felt like dead weight.  I kept going, but when one of the other young ladies said she was going to stop, I said I would join her.  The journey already had been beautiful and I had no need to achieve this climb.  However, when we got to the stopping point, I was beginning to feel a bit better, so I decided to go on.  I hadn't realized that our guide viewed anyone stopping as a failure on his part...which meant that he wasn't altogether truthful about how far we would be going...or how long it would take.  In hindsight, if he had told me the truth, I definitely would have quit!  It was a three hour hike up, climbing approximately 3000 feet.  As we climbed higher, it started misting as we entered the clouds.  Then as we got higher yet, it started hailing.  When we reached the top is was very cold and we were exhausted!  But we had to get down quickly again to make it to our cabins before dark.  We made it down the mountain in about two hours.  [Unfortunately, there was a swamp area that you step on pieces of grass to pass through - my foot slipped and I sank down in mud to my knees.  I believe that I lost my glasses in that fall.] 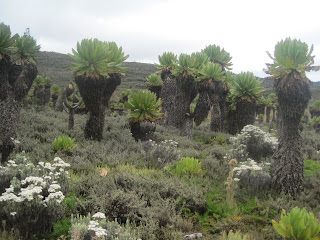 These trees here are part of the palm family.  This was my favorite part of the hike to the summit.  (Not just because it was flatter :-).  These trees were beautiful and the place was so quiet.  No wind.  No noise.  Just these beautiful trees. 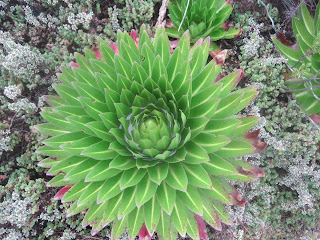 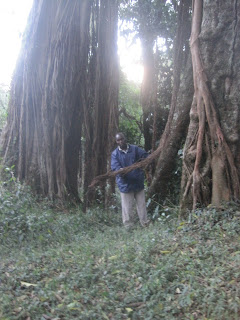 In this picture, our guide, Philip, is showing us a tree called a strangling fir.  Apparently bird droppings land on the branch of a tree (in this case, a cedar).  The seed sprouts on the branch the roots grow down to the ground (Philip is holding one of the roots that hasn't quite made it yet).  What you see behind Philip is a cedar that is being slowly "strangled" by this fir tree.  Slowly it will begin to die.  Very interesting. 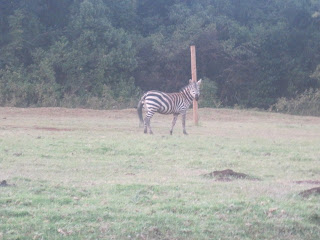 At the park, we saw zebra, water buffalo, baboons, water bucks, bush bucks, blue monkeys, and wild pigs.  We didn't see elephant or giraffe, nor did we have time to track, but we were told there are a large number there. 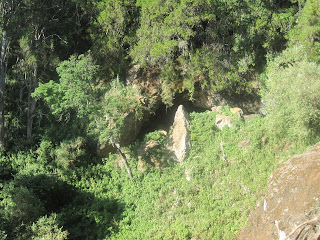 If you look very closely at this picture, you will see an opening behind the vertical rock.  There is a huge cave in there (none of my pictures turned out well as it was too dark).  In the rock is salt, and the animals will come in there to scrape the walls to lick or eat the salt.  The elephants will scrape the wall with their tusks and then eat the rocks, balancing them with the appropriate plants to ensure that the salt can be broken down, dissolved, and then passed.  It's quite amazing.  At the back of the cave were thousands and thousands of bats flying all around...an amazing cacophony of sound!  Apparently this cave was used for quite a number of ceremonies by the people in the area in earlier years.  It was very cool to be in there.
On Monday, I will begin learning to drive on the left side of the road.  To make things worse, the car that I am borrowing from ICM is a stick shift, not a problem normally, but the stick shift is also on the left.  Not sure how I'm going to swing that but it should be interesting!

I would be remiss to imply that this past week was all highs...there have also been significant times of wondering what I am doing here...do I have anything to offer...am I yet another well-meaning American imposing her agenda on others...am I qualified to do this work...how will I be received...many moments of loneliness...missing my children (Noah was sick this week, Hannah had a doctor's appointment that I really wanted to be at)...but that made the weekend even more sweet as I saw the glory of God and was reminded of His greatness, His creativity, His steadfastness, and His very active presence in my life, as well as the life of my children.