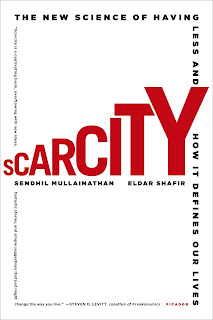 Recently I read a book called Scarcity by Sendhil Mullainathan and Eldar Shafir.  It is a fascinating book and I highly recommend it.  It has to do with how the brain works as it relates to the psychology of how we all struggle to manage life and tasks when we feel that we have less than what we need.  "Less than what we need" can refer to money, hunger, time, love, or any other need that we might have.  The realization is that people's minds act differently when they feel they lack something.  This sense of scarcity allows us to focus more intently on the pressing need and have a keener sense of the value of that need (benefits), but it also saps brainpower, willpower, and narrows our perspective (debilitating aspects).  Something we can all relate to is the idea of a deadline - when it is far out and we have lots of time, we are able to blow it off easily; as the deadline comes closer and time is more scarce, we are able to focus on it better but we might lose sleep or eat more or ignore friends while focusing.

Another study was a regular IQ test, but before having the participants take the test, they had half of the group read the following hypothetical scenario:


Imagine that your car has some trouble, which requires a $300 service.  Your auto insurance will cover half the cost.  You need to decide whether to go ahead and get the car fixed, or take a chance and hope that it lasts for a while longer.  How would you go about making such a decision?  Financially, would it be an easy or difficult decision for you to make? 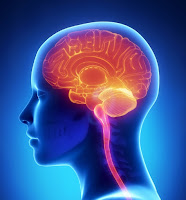 The other half of the group had the exact same scenario, but instead of a $300 service, it was a $3000 service.  The researchers had divided each group by their self-reported income between rich and poor.  In the scenario where the service on the car was only $300 ($150 to be paid by the individual), the rich and poor group did the same on the subsequent IQ test.  But on the scenario where the cost of the car was $3000 ($1500 to be paid by the individual), the poor did significantly worse.  All that was done was to tickle the idea of scarcity and the result for the poor was lower cognitive performance.  Imagine how this relates to test scores in low-income schools?

They also found that the idea of scarcity lowers impulse control as well.  They did a research study on two groups of people, giving one group two numbers to memorize and the second group eight numbers to memorize.  They then had them wait in a room where there was fruit and cake, with the only instruction to remember their numbers.  The real test was what they would choose to eat when mental bandwidth is more scarce.  Those who only had to memorize two numbers chose the healthier fruit, while those juggling eight numbers went for the impulsive less-healthy cake.  When we are juggling a challenge, we have less bandwidth for self-control.  In a similar experiment where again half of the group has to memorize two numbers and the other half of the group memorizes 8 numbers, the group was then served food that is culturally very different than what this particular group was used to (in this case, a chicken foot with claw intact).  The group with only two numbers was able to eat the food without any rude statements; the group with eight numbers had a number of rude outbursts, even saying "This is bloody revolting!"  Again, with the brain tied up in memorizing numbers, there was less bandwidth to restrain impulsive words.

I find this type of thing fascinating.  But I especially find it fascinating in light of the research that we did for the Discipling Marketplace Leaders ministry in Kenya.  As you remember, we found that those who made less than $9/day did not benefit from the ministry while those making $10/day and above made incredible gains after going through the program.  We argued that it was because of the stress of poverty, which didn't allow them to apply more complex processes that they were taught, such as marketing, book-keeping, etc.  We knew it wasn't education or gender, as that had been proven as statistically irrelevant.  But now we have better language for the challenge that the poor face, which is actually scarcity of bandwidth which reduces intellectual functioning, impulse control, and self-control.

The idea of bandwidth is definitely something to consider as we look at human behavior.  And right alongside that is the idea of slack, or a buffer, to absorb shocks.  We need to have enough slack in our _______(fill in the blank:  budget, calendar, diet, etc) to be able to manage life challenges.  When bandwidth is limited and there is no slack, we get caught in a scarcity trap: a situation where a person's behavior contributes to his/her scarcity.  How do we increase bandwidth, both for ourselves and in our work?  How many times have we judged someone's capacity (intellectual, emotional, or even capacity to parent, work, etc) without considering bandwidth and slack?

I'll write more about this book in a second blog, looking specifically at poverty and even more closely at microloans.  Hopefully at least some of you find this type of psychology interesting too!
Posted by The Reeds in the Wind at 6:38 AM No comments: