Suspending Our Fear of Heights 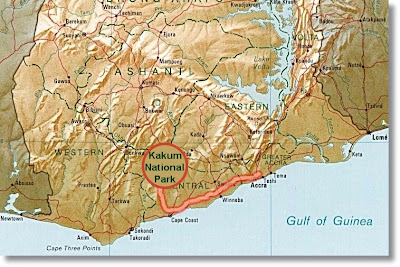 Twas the Week Before Christmas and All Through the Canopy...

The kids are on Christmas break and even though Renita and I have daily duties, we didn't allow that to stop us last Thursday. Renita asked for an unusual birthday present-- she wanted to be serenaded to in the clouds by those most dear to her. She had to settle for the three of us and Noah's friend chortling out "Happy Birthday" at tree-top level, but it was the best we could muster. 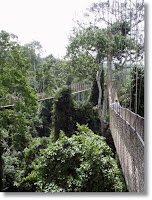 At 6:30am, we headed off for Kakum National Park, a rainforest preserve in southern Ghana. It took us two hours to get through Accra, and an hour and a half to get the rest of the way on very good roads. The 370 square kilo park is the home of rainforest elephants, leopards, crocodiles, pangolins, monkeys, hundreds of bird species and much more. It also offers an attraction unique in Africa and famous world-wide-- a 350 meter rope bridge, suspended 40 meters (130 feet) above the forest floor. The bridges are anchored to trees that towered another 30-40 feet above us, the majestic kapok, or silk-cotton tree. 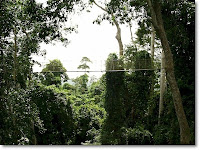 Kakum National Park is a well developed and maintained place, with professional managers and guides, as well as a nice cafe, museum and gift shop. There are trails and even places for tent camping, but it is the canopy walk that draws tourists in from all over the world. As for Yers Trooly, I had mixed feelings about the excursion. On the one hand, I wanted Renita to have a great birthday, and I love getting out into nature anytime. On the other hand, the rainforest canopy is an incredibly humid place by 11:00am, and a rope walkway requires some effort,

especially for a fat 55 year old. Not only that, the walkway itself is very narrow, and one never forgets that one is swaying twelve stories above the ground. I mean, as I tipped and tilted, squeezing along the walkway, I was looking down on the tops of 90 percent of the trees below. The pic to the left gives you an idea of the view down.

Anyway, we walked the canopy, and it was lovely in spite of how tired it made me. The highlight of course was being able to grant Renita's wish, and sing to her while in the canopy. Hannah caught it on video, and if you are a brave soul, it exists for your viewing pleasure below. It was clear we were only getting a bare introduction to the park. The area demands to be explored at length, and with the Cape Coast and Elmina castles nearby, one could easily spend weeks immersed in this part of Ghana's history, geography, zoology, and botany.
We left in time to visit a local restaurant that served up crocodile-- not on the menu, but alive on the patio. They'd come up out of the pond that almost surrounded the restaurant and the waiters would toss them some chicken. Real touristy, but they are beautiful in the water. We left the area by 3:00pm, made good time until we hit Accra, and covered the remaining 10 miles in two and a half hours. 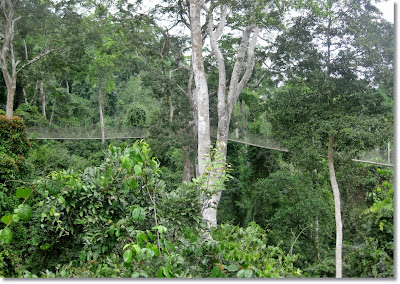 A stretch of the Kakum National Park Canopy Walk, with a supporting Kapok tree in the middle.

Looking out at the forest from the canopy walk. Really beautiful. Most of these trees are about 60 feet tall, or about 20 meters. Notice how the Kapoks dwarf them. 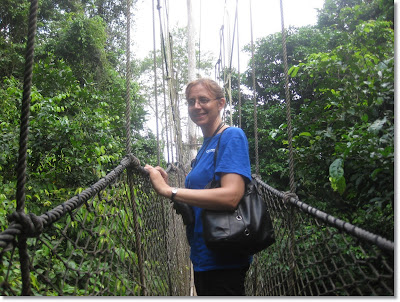 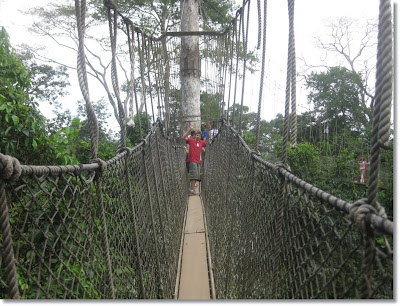 A good view of that narrow walk, with Noah and pal Philip trying to make it rock. 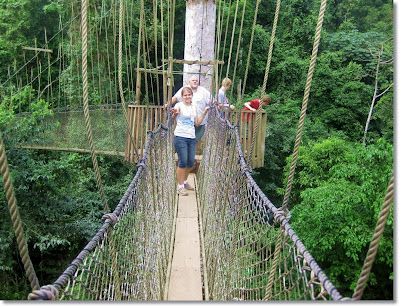 Hannah, Yers Trooly starting on another section of the walk, with Noah and Philip behind on the platform. Love those platforms! 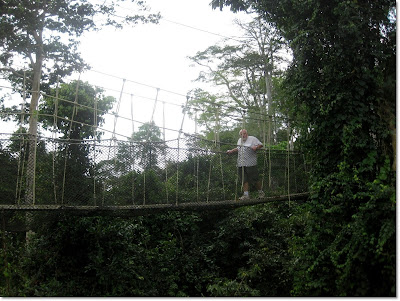 Yers, lumbering, puffing, and oofing his way across. You use your arms and shoulders as much as your legs to make your way. 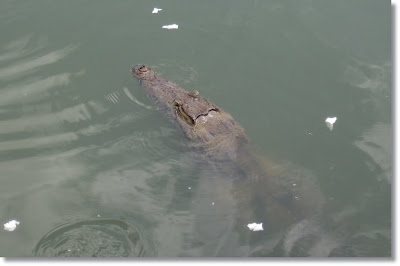 One of the crocs at the restaurant. Bread brought fish, fish brought the croc. Note the nostrils on top of the snout. 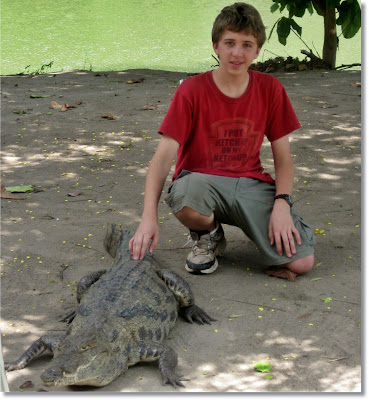 Noah and his new friend. I know, I know, its a touristy pic. But we were tourists. And the croc was real, and alive. 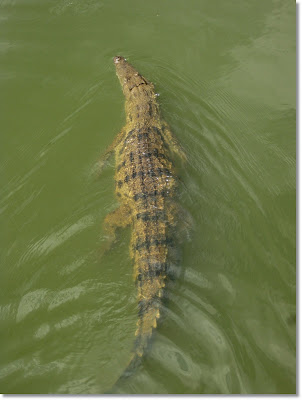 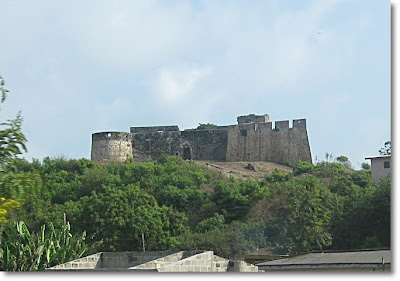 On the way out, a glimpse of Cape Coast Castle. Built by the Swedish around 1655, it was seized by the Danes in 1663, then by the British in 1664. Initially it was used for general trade with various local groups, but eventually became a central location for trafficking thousands of men, women and children as slaves. In 1844, it became the seat of British colonial rule.

Matriarch and fam 120 feet up in the Ghana rainforest, Kakum National Park. (Note Patriarch climbing the rope "Stair of Testing" to offer worship.)