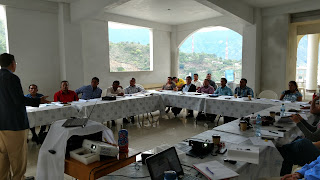 The venues where we get to give trainings sometimes are amazing.  I'm not sure that we will ever be able to top giving a training on a boat on the Nile River in Egypt, but the view from the window of the church that we taught in this past week, in Lake Atitlan, Guatemala, was pretty remarkable.  To simply say that Guatemala is a beautiful country would be a gross understatement.

The time we spent there was very productive, with three different groups of people involved in several different types of trainings:  church leaders and pastors, NGO leaders, and business people.

But even beyond the views and the beauty of God's creation, I love to hear and learn from God's people, with all of their complexities and uniqueness.  This week, I met a number of inspirational people, and would like to introduce you to two different men, all who came from families in absolute poverty, all of who made a decision at a young age to get themselves out of poverty. 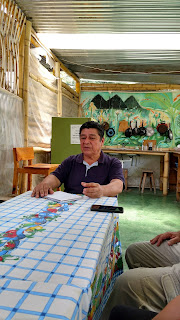 Meet Pastor Santos, who decided at the age of eight that he was not going to live in the same poverty as his parents.  He was tired of not having shoes and sleeping on the floor.  Pastor Santos started with a corn mill business that he worked from 4 am - 9 am, and a coffee farm that he worked from 10 am - 2 pm.  Any profit that he made, he reinvested into his business and determined to live very simply to help his businesses to grow.  He grew his businesses to four machines for corn, and his coffee farm to the point where he was selling to big coffee exporters.  He bought land whenever he could and earned money through selling it. 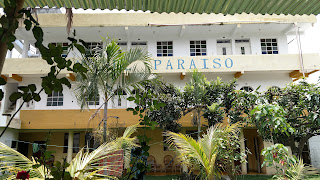 in them.  Pastor Santos also felt called into the ministry at a later age, and when we met him, he was sitting next to the three story hotel that he built with his wife and children.  This hotel is going to help him into his retirement, and as he owns it debt free, he is able to help out people who come to town for various workshops and church gatherings with discounted rooms.  Why was Pastor Santos able to make a decision at the age of eight to move out of poverty? 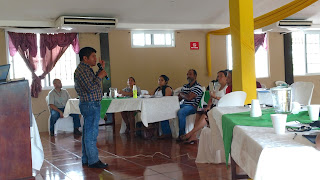 Meet Antonio, one of twelve children, who also grow up in absolute poverty.  His father was a coffee farmer and, when giving his testimony, he shared that there was no reason that any of his brothers or sisters should have lived into adulthood.  He decided that he wouldn't live that way or raise his children in that depth of poverty.  Through extreme difficulties and struggles, he graduated from university as a teacher and began to see that his people needed access to capital.  He started a microfinance organization that now serves over 1500 members in a rural area of Guatemala, is running a school, and raising two beautiful children with his wife.  It hasn't been easy to run the microfinance organization, but Antonio says, "The success of the business was not because of the good customers but because of the bad customers.  I had to learn from them and develop policies and procedures that led to greater protection of the business."  Why was Antonio able to lift himself out of poverty and be such a sign of hope to many around him?

One of the things we often talk about are how the rich and the poor need each other - the rich bring hope and the poor bring faith, and together love is created.  But sometimes the poor find a hope that is beyond human understanding given what they have seen; the rich are able to have a dependence on God which is beyond human understanding given their lack of perceived "need" of God.  These inspirational stories happen more often than we know but are so moving.

Posted by The Reeds in the Wind at 7:06 AM No comments: