Wealth Creation - For or Against?

I have been privileged to be part of a global consultation group to bring the Business as Mission (BAM) movement into the gathered church.  It has been exciting to hear of pockets of this type of work growing and flourishing places other than where DML is working - in Hong Kong, Australia, Brazil, Peru, and elsewhere!

But this week we ran into a challenge as we discussed the term "wealth creation," while looking at the BAM paper written on the Role of the Church in Wealth Creation.

I wasn't surprised.  For years, I've had to talk about "poverty alleviation" rather than "wealth creation."  I knew that "creating wealth" is an uncomfortable term for many Christians.

And it is understandable to a degree.  When we think of the term "wealth," there are negative images that come to mind: the growing gap between the rich and the poor, hyper-consumerism, wastefulness, uncaring attitude by the rich toward the poor, and so on. 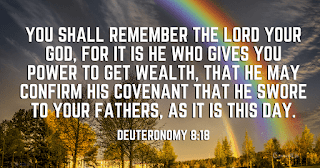 But the creation of wealth is a gift from God to His people for the purpose of all people flourishing.  Deuteronomy 8:18 says, "But remember the Lord your God, for it is He who gives you the ability to create wealth, and so confirms His covenant."  It's part of the covenant.  The desire from the Father in Genesis 1 and 2 (before the fall) is to give us the resources in creation for us to use for the flourishing of all people.

The Bible talks a lot about wealth and the use of money, with three key themes:

The teaching in the church tends to focus on the first and second way, but often does not teach on the third one.  But what we often forget is that there can be no sharing of wealth unless it is first created.  And the only place wealth is created is in the business world.  Churches, governments, and educational institutions all receive their money from those who are doing business (taxes, tithes, fees - all come from wealth that has been created).
From the Wealth Creation Manifesto of the Lausanne Movement (started in the 1970s by Billy Graham for the global church to address global issues), is this statement:

‘Wealth creation is rooted in God the Creator, who created a world that flourishes with abundance and diversity. We are created in God’s image, to co-create with him and for him, to create products and services for the common good. Wealth creation is a holy calling, and a God-given gift, which is commended in the Bible.’

Unfortunately the term "wealth" is often defined only to money, but we need to remember that it is much broader than that.  The United Nations defines inclusive wealth as "the sum of natural, human, and physical assets."  Natural assets include land, forest, energy resources and minerals.  Human assets are the population's education and skills.  Physical assets are machinery buildings and infrastructure. This broader view of wealth makes the creation of it much more palatable for many, I believe.

I know that if we have the opportunity to explore this more full definition of wealth and the idea of wealth creation (building capacity for the purposes of flourishing and shalom), many Christians would agree. 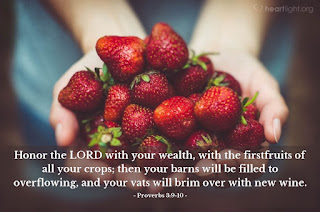 The problem is that we don't have that opportunity to talk to all and if we use the term "wealth creation," it may become a barrier to the message of what we are doing.

So what to do?  I would love to hear from you.  If you hear that a ministry is involved in "wealth creation" in the majority world, does that strike you as positive or negative?  If it is negative, what might be a better choice of words that would allow for this not to be a roadblock?

The Wealth Creation Manifesto goes on to say this:

‘Wealth creators should be affirmed by the Church, and equipped and deployed to serve in the marketplace among all peoples and nations.’

I long to see this happen.  But as a Kenyan pastor and leader has said, "No pastor should ask for a tithe until we have taught about wealth creation from God's perspective and have taught financial management."  The Bible doesn't shy away from talking about money and economics, and neither should the church.

There are some who fear that if we teach about wealth creation, we move closer to teaching about the prosperity gospel.  But when we are properly equipped in what the Bible teaches, we see the theology of work, the encouragement of generous giving, loving our neighbor, and the condemning of hoarding giving a proper balance to wealth creation.  They must go together.

If you have a minute to let me know your thoughts on the term "wealth creation," I would deeply appreciate it and would take your thoughts to the global consultation group.  Thank you!