Everyone will sit under their own vine and fig tree, and no-one will make them afraid. (Micah 4:4)

My daughter introduced me to the Broadway musical, Hamilton, a few months ago and I have grown to love it.  I grew up with two musicals:  Fiddler on the Roof and Sound of Music.  I think those were the only two movies I saw until the age of 14 or so.  So it doesn't take much for me love musicals.

But this one has taken the country by storm in a way that musicals seldom do.  Many have said it has made American history alive again.  There are so many aspects that I love about it, from the intentionality in the inclusion of diversity, to the rich lessons of our history from young immigrants, from the personal pain in the story of infidelity and the loss of young life.  It's funny, touching, sad, informative, and I could go on.  While there are some liberties taken for the purpose of telling the story on stage, there is much historical truth to Hamilton.  While some are rightfully critical of the role that our founding fathers played in owning slaves, I find an aspect of redemption in the fact that this was written and acted out by mostly people of color.

There is one song that has been playing over and over in my mind lately, when George Washington has decided to leave office and he quotes Micah 4:4:  Everyone will sit under their own vine and fig tree, and no-one will make them afraid.  Apparently, Washington loved this verse and there are at least fifty times that it is quoted from him.  [I know that this is bitterly ironic given the fact that he didn't live it out for everyone and didn't define people of color as fully human.]

But it is a beautiful verse to think about.  It sounds heavenly. 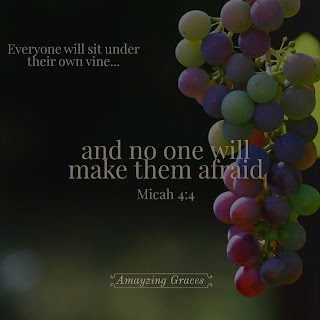 Second, everyone will sit under their own vine and fig tree.  Ownership.  My own piece of land.  We all long for it.  We feel safer in it then in renting.  And this land is productive.  We work it.  It takes care of us when we take care of it.  It does what it was created to do when we do what we were created to do.  Genesis 2:15 says we are to work and care for the garden.

Third, no-one will make them afraid.  How many of us (especially in developing nations) own our own land and yet are still afraid?  This past week we helped two of our DML team relocate because of being afraid on their own land.  Afraid of kidnappers, thieves, those who wish to do harm.  Many are afraid of laws, authorities, policies, polluted air, things that cause us harm that we have no control over.

But in Micah 4:4, we are resting on our own land, enjoying the fruit of the land with no fear within or without.

I admit to fear for my colleagues in several countries.  I fear for the children growing up with such stress and turbulence that it impacts their capacity to cope and thrive and flourish.  I admit to fear for my own country and the incredible divisiveness not just politically but in the church.  I fear we are being torn apart and there seems to be no way of talking to each other or understanding each other.

How I long for the day when EVERYONE can sit under their own vine and fig tree and feel no fear.

And while we long for this piece of heaven, we are instructed to help to bring the Kingdom of Heaven to earth.  What is my part at a time such as this?  How am I working to bring about Micah 4:4?  Or am I involved in preventing Micah 4:4 perhaps blindly?  Am I fanning the flame of divisiveness with my speech or seeking understanding and peace?

God, what can I do to be part of your will being done on earth as it is in heaven?

If not through us, then He will find a willing vessel somewhere. 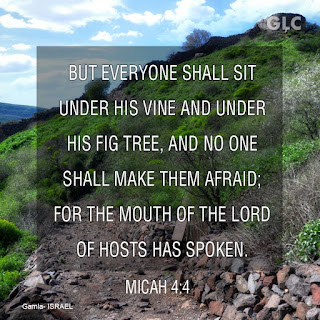 Posted by The Reeds in the Wind at 7:00 AM No comments: