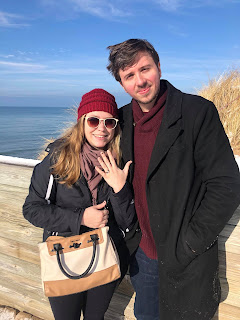 He finally asked...and she said yes!My son Noah has been dating Hannah Birmingham for five and a half years in what could be described as a sweet and loving courtship of two best friends.  On Saturday, January 2, Noah asked Hannah to marry him, and she said yes!A little bit about Noah's Hannah:  Hannah Birmingham is the first born of four children to Barry and Bev Birmingham.  Her parents were  school teachers internationally and because of that, Hannah grew up in Turkey and South Korea.  Her parents have since returned to the US and have settled in Texas.
Noah and Hannah met at Calvin University, as they were both majoring in International Relations.  Because of their international experience, their passion for social justice, and desire to make a difference in the world, they hit it off pretty quickly.  Hannah currently works at International Justice Ministry and Noah works as a background investigator in Washington DC.  We are really hoping that they will move back to Grand Rapids in the near future!
Below are a few more pictures of the happy couple.
On a more troubling note, my 91 year old father has contracted COVID, after avoiding it a number of times on his floor in Holland Christian Homes in Brampton, Ontario.  On his wing, there have been 10 COVID deaths, and thirty staff who have contracted COVID.  At one point, my dad was one of only four patients who had not contracted COVID.  The building he is in has been taken over by a nearby hospital.  No-one has been able to visit my dad since March.  He was put on oxygen yesterday but he continues to be physically very strong so we believe he will pull through this!  We do ask for prayer not only for him but for all the frontline workers who continue to contract COVID and continue to care for these elderly and sick patients.