[I wrote the blog below last Wednesday, June 7, looking to post it as usual on Monday, June 12.  On Thursday, I went back to the doctor as I had finished the malaria medicine and the fever was gone, but I was still throwing up and having all sorts of gastro-intestinal issues.  The doctor surmised that it was probably amoebic dysentery or giardia, told me to cancel my trip to Ghana, and start working on labs.  The next day, I realized that the treatment for both of those illnesses is the same, and being the self-proclaimed doctor that one becomes when living in places like Liberia, I requested that we skip the labs and go straight to the treatment so that I could still go to Ghana.  Surprisingly, my request was granted and on Friday I started the treatment.  By Sunday night, I was beginning to feel better.  But my loving family and friends have counselled me to delay my trip, skipping Ghana and just going to Nigeria at the end of June.  As I have been sick for about three weeks now, having eaten little and losing a good amount of weight, I have finally agreed to their counsel in order to build up my strength and to be sure my immune system is strong again. This is a costly decision financially and particularly difficult for the "ever-responsible" Renita.  But thankfully, the work in Ghana will continue without me, so please pray for Fanny, Beatrice, and David!]

Malaria tricked us once before and now it tricked me again.  Thankfully, my son Noah was quicker to be onto it.

In November 2008, we moved back to Grand Rapids after 3.5 years in Liberia, and were preparing to move to Ghana.  In April 2009, just at the time that there was the first swine flu outbreak, Bob got sick and we thought it was swine flu.  After being quite sick for about a week, someone suggested malaria, and sure enough that was it.  It had been dormant in his liver, waiting for warmer weather to come out.  By the time we caught it for Bob, it was still so far developed that Bob had to be hospitalized, without insurance (we didn't know that his missionary medical insurance only allowed for him to be in the US for three months), costing us about $18,000 and requiring us to check him out of the hospital against medical advice because we couldn't afford for him to stay longer.

I returning from Guatemala, and am picked up in Chicago by my dear husband Michael who has a terrible cold.  On Tuesday, I come down with a fever and a cold as well.  By Friday, I'm nauseous, throwing up and fever keeps climbing, in addition to coughing and cold symptoms.  Michael 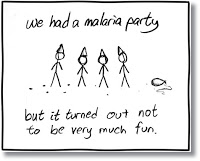 had been diagnosed with an ear and throat infection, and suspicious that I may need antibiotics as well, I go to the doctor.  No sign of infection anywhere but doctor says that if I still have a fever of 101 F by Sunday, I should start an antibiotic.  Fever reaches 103 on Saturday, still there on Sunday and I start the antibiotic.  Fever goes away, but I'm still nauseated, throwing up, and can't eat.  I'm finished with the antibiotic by Thursday; fever starts coming back, I'm looking jaundiced, cold symptoms are pretty much gone, and Michael and I start to wonder what else this could be.  Maybe Zika?

My kids both check in with me regularly to see how I'm feeling, and Noah says, "Mom, it's malaria.  Go to hospital."  (Which I love because he says it the African way - not "go to the hospital" but "go to hospital.")  Noah keeps insisting its malaria.  I review websites again and think back over the past few months.  I was in Kenya, Ethiopia, and Uganda from mid-March to mid-April.  Ethiopia and Kenya have high enough elevations that malaria is not a great risk, but I knew when I was in Uganda (just for a few days) that I should have been on anti-malarial medication.  I actually even inquired about getting to a pharmacy to buy some...but then didn't.  Oops.

Thankfully my doctor was a missionary kid in Nigeria and understands malaria well.  She got me on meds (which are often worse than the sickness!) and I'm finally feeling better.  Unfortunately, I leave for Ghana and Nigeria again on Thursday for about four and a half weeks.  I've not had much recovery time, have a VERY hectic trip planned, didn't have much time to get anything done at home, and am quite behind in my work.

But God's got this.  And I hope to be smarter about malaria, and not quite as complacent.  I WILL be on anti-malarial drugs for this next trip for sure.

If you want to understand better how malaria works, this is what Bob wrote when he contracted it in 2009 (to read the full post click here)

As you know I like to be pithy, erudite and educative on all my posts, but this requires more energy than I fear I can muster. We'll see. The short version is I have malaria, which occasionally happens when folks come back from the tropics. The disease is caused by protozoan parasites of the genus Plasmodium. Five species of the plasmodium parasite can infect humans; the most serious forms of the disease are caused by Plasmodium falciparum. Falciparum lives in the gut the female mosquito and when she bites, the microscopic little creeps enter through an anticoagulating mosqito slobber, and make a bee line to the liver.

Patton would be put to shame after discovering the brilliance of this little bug’s strategic assault on our body. The parasite basically infiltrates a Trojan horse into our liver, where it starts duplicating itself. Meanwhile, it is sending out a cloaking signal (similar to the Klingons in Star Trek) from within this Trojan horse so as to remain undetected by our body’s immune system. In my case, there it rested, in my liver, for at least six months.

Last Monday, however, it was time to come out and party. From Home Base Liver, the parasitical creeps searched for my juicy red blood cells. Penetrating those, it started duplicating within them as well. Usually such infected blood cells would be exterminated in the spleen. So to work its way around that, each of these little demons produces as much as 60 different types of protein which, when on the surface of the blood cell, make it stickable to the surface of blood vessels, hence avoiding potential doom by not making it to the spleen. And these proteins are the first moment when the parasites become detectable to our body’s immune system. However, by the time our body comes up with some antibody, the millions of parasites are already switching to one of its other 59 proteins. The body’s immunity system becomes a toothless bystander, because the number of different and constantly changing protein combinations are essentially infinite.

Then things get gruesome. About every three or four days all the infected blood cells burst, exploding from over population and sending a wave of fever onto Yers Trooly, so that the next batch of demon creep babies can go about the body in search of fresh red blood cells again.
Posted by The Reeds in the Wind at 9:41 AM No comments: